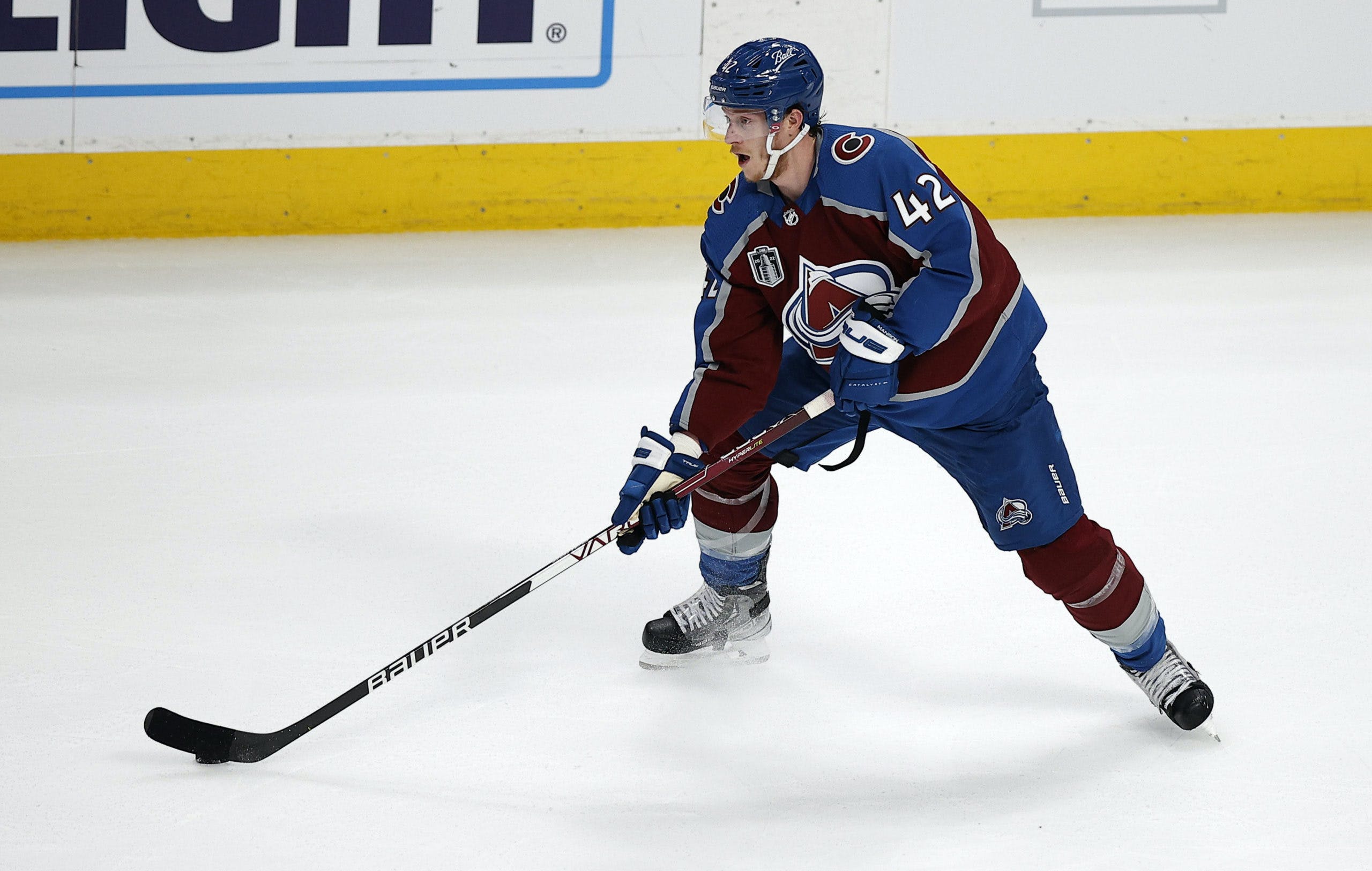 By Noah Strang
5 months ago
The shutdown defenceman is one of the prototypical player builds in NHL history and for the longest time they all looked the same. Big, burly, mean bullies patrolling the blueline and punishing any opponent that dares to enter his territory. Think Scott Stevens headhunting for the New Jersey Devils in the 1990s.
However, over the last 15 years, we’ve seen rule changes and new tactics that have changed the definition of the shutdown defenceman. While many teams still employ menacing, oversized giants, it’s no longer a requirement to have a player like that in your top-four.
In fact, players that resemble the traditional shutdown defenceman build have often struggled to adjust to the new game, making general managers look stupid for wasting big dollars or draft capital. The Canucks can think back to the Erik Gudbranson experiment on their own team for a recent example.
The recent Stanley Cup champion Colorado Avalanche did have big defenders on the roster in Erik Johnson and Josh Manson, yet it was the trio of Bowen Byram, Cale Makar, and Devon Toews that ate the majority of minutes at 5-on-5. Those three young defencemen were able to use their skating and smarts to neutralize Tampa Bay, a team featuring some of the best offensive talents in the world.
The Canucks desperately need a defenceman that they can fully trust to be rock-solid defensively. While Oliver Ekman-Larsson is their best fit at the moment, he’s not a long-term solution and his already middling foot speed will only become a larger issue with age.
Ideally, the Canucks can find a player that fits their core’s timeline and is excellent defensively. If he was right-handed, that would be the cherry on top. He doesn’t need to be Victor Hedman, but they do need to be trusted to keep the puck out of the Canucks’ net.
These players don’t grow on trees. Every franchise would like to have at least one, and preferably a few, somewhere in its organization. The Canucks will need to exhaust every possible acquisition channel to find the best deal. Here are some of the names that they should be looking at to fill this glaring organizational need.

With a couple of spare forwards that could be on the trading block, it’s very possible that the Canucks search for their shutdown defenceman on the trade market. Here are two names they could go after.

One of the NHL’s breakout stars from last season, Siegenthaler is a name that some fans may not be aware of yet. He’s an analytics darling as the Devils did a much better job at controlling play and limiting chances while he was on the ice, surrendering only 25.28 scoring chances per 60 at 5-on-5, the best mark of any player on the team.
His great season led to him being named the top defensive defenceman in the league by respected hockey statisticians Andy and Rono.
Siegenthaler is 25 years old, a left-handed shot, 6’3, and weighs about 220 pounds. While the Canucks left-side defence is getting crowded, a shift from Ekman-Larsson or Hughes to the other side would open space for Siegenthaler and Jack Rathbone to both be in the lineup.
The New Jersey Devils have been a team mentioned in J.T. Miller’s trade rumours. If that is the star forward’s eventual destination, Siegenthaler could be an interesting piece to receive in a package in return.

If the Canucks wanted to target a player with more upside, Kaiden Guhle would be an amazing get, though would cost a king’s ransom. He was a first-round pick in the 2020 NHL Entry Draft and spent last season with the Edmonton Oil Kings in the WHL, winning the playoff MVP award.
He’s a great skater and very mobile. While that doesn’t translate to a ton of points, it allows him to stick with speedy forwards and pivot quickly to shutdown oncoming attacks. Guhle projects to be a solid top-four defender that can hold things down defensively for his pairing.
As one of the better defence prospects in hockey, Guhle would not be cheap to acquire. However, if the Canucks felt like he was the missing piece towards creating a devastating top-four defence core, they could make a big push. It’s a bit optimistic to think that Guhle will be wearing a Canucks jersey anytime soon, but with a top-ten scorer on the trading block, crazier things have happened.

While the Canucks could target their next shutdown defensemen in a trade, that would require the team to give away assets. Finding someone in the draft to fill this role would mean a cost-controlled asset that the Canucks didn’t have to pay to acquire.

Ranked in the 28-38 range by most prospect evaluators, Chesley is viewed as one of the best defensive defencemen in the upcoming NHL draft. He just finished a season playing with the USNTDP juniors, a program that has produced a ton of high-quality NHL talent.
Most scouts refer to Chesley as a safer draft option, someone that has a high floor but lacks the elite superstar potential of some of his peers. That may be in part because he doesn’t put up a ton of points, but Chesley has great defensive instincts and is extremely effective in his own zone at both 5-on-5 and the penalty kill.
He would be a reach for the Canucks current draft position, but if they traded down then he would be a great grab later in the first or early in the second round.

With the current situation happening in Ukraine, no one knows how Russian prospects will be treated at the 2022 NHL Entry Draft. However, there’s a good chance that many of them slide and provide strong value to their draft position for any team that takes a chance. Daniil Orlov is a defenceman that’s ranked between 90-135 by most draft outlets and will likely be taken somewhere between the 3rd and 6th rounds.
Orlov spent the 2021-22 NHL season playing for Sakhalinskiye Akuly in the MHL in Russia, recording 30 points in 54 games. Scouts and evaluators have commented positively on his size and defensive ability as he stands 6’2″ and is known for keeping opponents on the outside of the ice.
He’s another player that is a strong skater and uses that ability to thwart rushes and scoring chances. While he will likely never be a great offensive contributor, Orlov would be a great use of a late-round selection for the Vancouver Canucks.

Last but not least, adding a defenceman in free agency would help the Canucks fill this role, however likely at a higher salary cap number. With minimal cap space and a lack of great defenders on the market, this would be the worst outcome. However, there are a few players who might be able to fill this role, even if just for a few seasons.

Josh Manson just played this role for the Stanley Cup champion Avalanche. He’s big, shoots right, and has proven to be a solid defender at the NHL level. He could slot into the top-four on day one of next season without very much concern.
However, Manson will likely have multiple teams bidding for his services, driving the price above a level that the Canucks feel comfortable paying. He also is now on the wrong side of 30 and will be looking for a contract that offers financial stability late into his career. It will all likely combine to create a situation where the Canucks cannot win and thus should stay away.

Lyubushkin is one of the more interesting targets for the Canucks as a right-handed defenceman that is very one-dimensional. He has strong defensive metrics and can shut down the opposition but provides next to no value at the other end of the ice.
The good part about acquiring a player like Lyubushkin is that the financial commitment wouldn’t be too large, though the flip side is that the low price tag is for a reason. Taking a flyer on Lyubushkin could provide the Canucks with a physical depth option, though he’s unlikely to be that minute cruncher that other names on this list could develop into.
Do you think the Canucks need to target this type of player right now? How do you think they should acquire them? What names stand out to you?
Uncategorized
Recent articles from Noah Strang