3 takeaways from Canucks vs. Kraken: Kuz-Mania, Burroughs bearing down, and Silovs is still learning 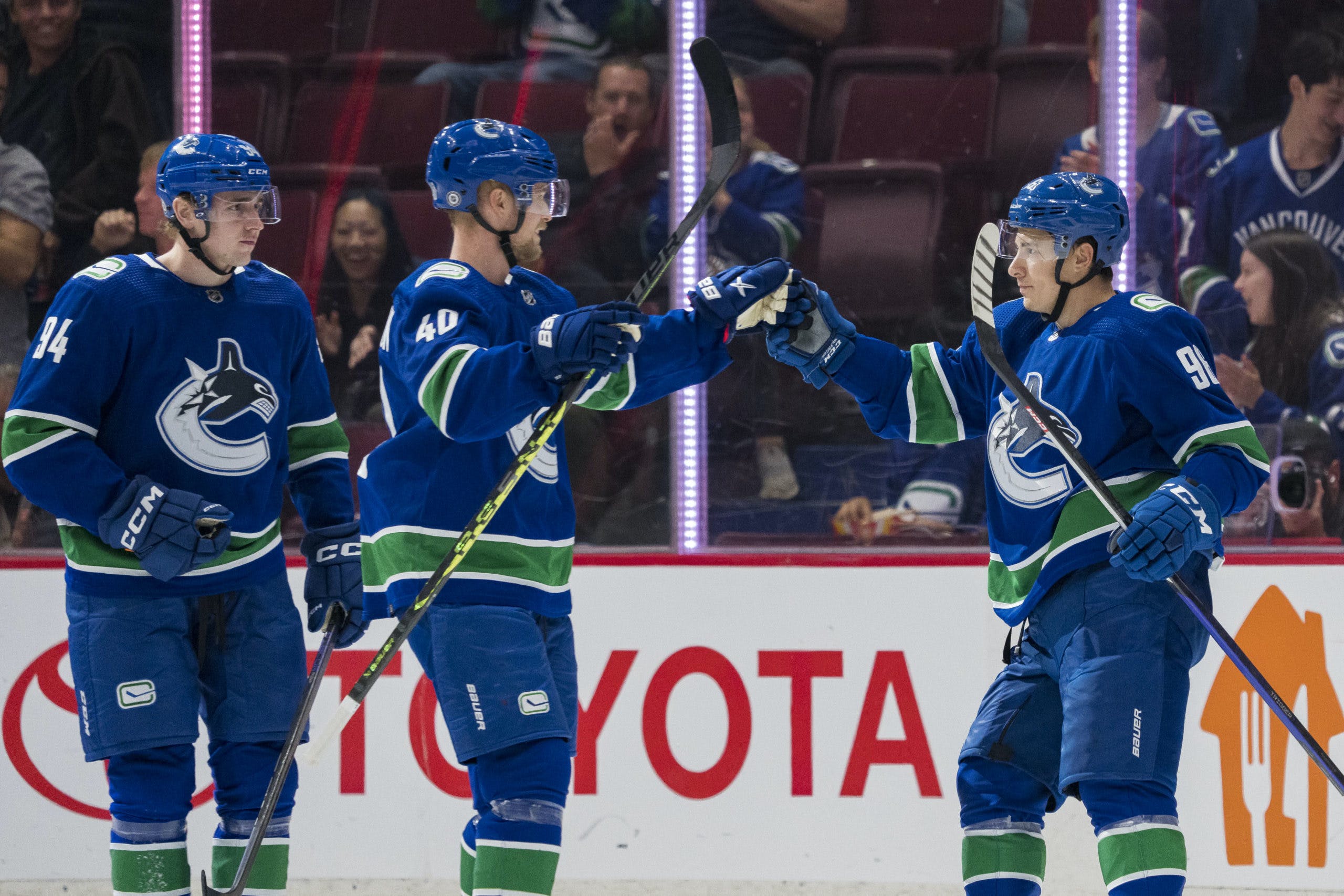 By Lachlan Irvine
4 months ago
As every team does during this time of year, the Canucks learned a hard preseason lesson about putting away opponents as they blew a 3-1 lead and lost to the Seattle Kraken in overtime.
But even though the result is a bitter pill for the Canucks to swallow, fans got treated to about as close to a regular season tilt between archrivals as exhibition hockey can get. There was fast-paced action, a few heavyweight fights and, of course, there was a three-point night for Andrey Kuzmenko.
Speaking of which, here are three crucial points from tonight’s Cascadia Clash at Rogers Arena.

It’s only the third game of the preseason, but Kuz-Mania has already arrived in Vancouver.
Andrey Kuzmenko’s first goal in a Canuck uniform had all the hallmarks of a bonafide NHLer. He cleanly receives the pass from Quinn Hughes, adjusts his angle to use unsuspecting Cameron Hughes as a screen, and beats Joey Daccord just over the right pad with a lethal snapshot.
On a power play midway through the period, Kuzmenko played more of a passenger role as Elias Pettersson and J.T. Miller put on a gorgeous passing clinic. But he still provided a good net front presence and finished the play off like he’s played with Pettersson and Miller a thousand times before. That’s a valuable amount of familiarity for him to already have with his linemates.
Quinn Hughes certainly likes what Kuzmenko is already serving up.
“I think you’re gonna see that a lot this year,” Hughes said about his new teammate. “It’s exciting when you add pieces like him because he’s very talented, he works hard, and I can see him having a really good year and helping us this year.”
But before anyone starts throwing out the Pavel Bure comparables, there’s still a lot of work ahead of him. Jim Rutherford has already spoken about how he’d like to see Kuzmenko defer to his linemates more often and shorten his shifts down a lot. Tonight Kuzmenko’s shifts averaged out to a more manageable 52 seconds, but he was also one of just three skaters who didn’t play a second of shorthanded time.
So while it’s great to be pumped up, let’s make sure he can completely clear the Fedor Fedorov bar first.

Kyle Burroughs still has a chance

When people were projecting their Canucks opening night rosters, Kyle Burroughs seemed like the clear ninth man on the blue line. But based on his showing so far, and the lack thereof from some defenders ahead of him, there’s still a chance for Burroughs to make the final cut.
Burroughs looked quite comfortable playing on a pairing with Jack Rathbone, and has embraced the friendly competition that comes with fighting for a third pairing spot.
“I like competition so either way it kind of fuels me,” Burroughs said. “I know what I can bring to the team and I’m pretty confident in what I can do, and it’s up to me to play my way to try to earn a spot.”
The quiet hard-working game Burroughs prides himself on has been in stark contrast to some other defenders. Tucker Poolman played eighteen minutes but has yet to show anything that would make him irreplaceable. Danny DeKeyser is in a similar boat, only without a guaranteed contract waiting for him at the end.
Don’t be surprised if Burroughs ends up finding his way onto the main roster just like he did last year.

It’s (still) not the goalie’s fault

Arturs Silovs struggled during his 25 minutes of game time, and some people were quick to blame him for the end result. Some of that is probably due to a certain “watch how Silovs moves” proclamation, but there’s a lot more to it than that.
First, Silovs’ defenders get their wires crossed and leave Kole Lind wide open next to the net, giving him the space to get a wonky deflection past the goalie’s glove.
Next, the Canucks don’t maintain possession after a long shift. The Kraken pounce on a loose puck, and Silovs has little time to react.
Finally, the OT goal. Multiple times in five minutes the Canucks tried to force a scoring chance only for Seattle to turn the other way on an odd-man rush. Sure, Silovs got caught over-committing on the initial Ryan Donato deke that led to the game-winning goal, but it only happened after no Canuck questioned why only two Kraken skaters were defending the net.
If tonight’s largely NHL-caliber Canucks roster told us anything, it’s that relying on the goalies could still be a glaring issue this lineup has to solve. At 21 years old and with only 11 AHL games under his belt, Arturs Silovs still has a lot of development left to go before he’s ready to steal games. He might’ve looked like a rookie at points tonight, but that’s because he still actually is one.
Thankfully for the Canucks, Thatcher Demko looked terrific in his postseason debut, because he might have to pull a lot of the same magic tricks he did last year, at least in the early going.
Editorials
Recent articles from Lachlan Irvine