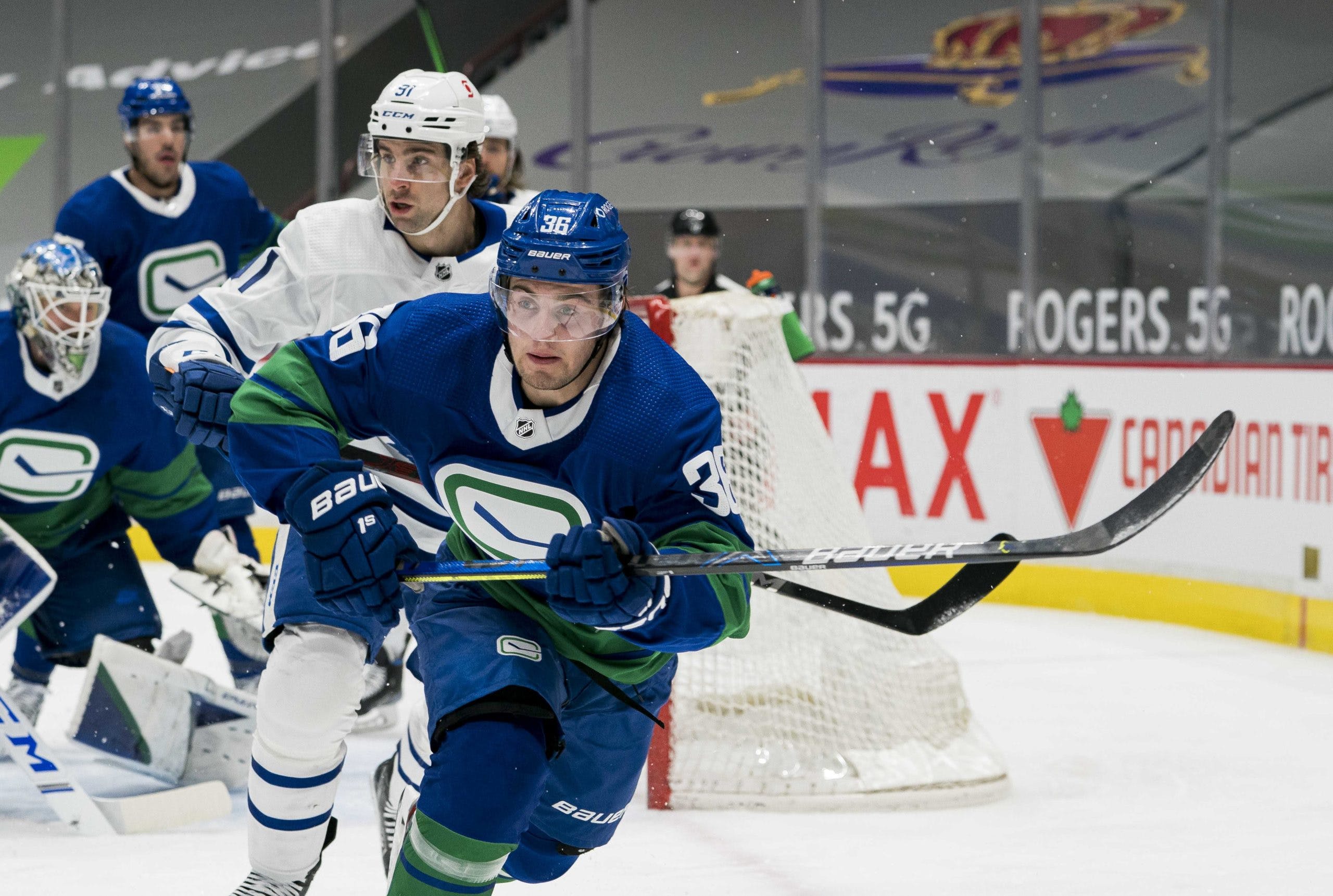 By Faber
1 year ago
Things have not gone great for the Vancouver Canucks this season but there are some exciting stories to follow in the second half of the season.
The playoffs aren’t impossible, but it will take a 17-6-3 finish to get to 63 points. According to SportsClubStats, finishing the season with 63 points will give the Canucks a 50.5% chance of making the playoffs.
It will take a hell of a run, but if they aren’t able to pull it off, there are still some exciting storylines to follow as the season treads along.

Only Connor Hellebuyck has faced more shots than Thatcher Demko this season. Since finding his groove at the end of January, Demko has been one of the best goaltenders in the league.
He has posted an 8-7-1 record in his last 16 games but has had a .925 save percentage and is third in the NHL for goals saved above expected during that stretch. At the age of 25, Demko is beginning to establish himself as a true number one starter in the league and has earned more trust from head coach Travis Green.
Over the past few weeks, more nights than not, Demko has been the best Canuck on the ice. He is not only becoming an NHL starter, he’s becoming one of the premiere starters in the NHL. He’s looking more confident every game and is remaining calm throughout the continuous amount of scoring chances against.
He’s been a bright spot in a dark season and will continue to be a fun story to follow as the season goes on.

Which young talent will make their NHL debut first?

There are a few high-end prospects who could make their NHL debuts later in the season.

After being drafted by the Canucks 10th overall at the 2019 NHL Entry Draft, it’s been a long 20 months for Vasily Podkolzin.
He is now coming up on a potential get out of Russia free card when his KHL team gets eliminated from the playoffs. Jim Benning will need to work some magic to get a clean break from SKA and Russia in time for Podkolzin to play games with the Canucks this season.
Podkolzin is an option for Russia at the World Championships and could stay in his home country to train for that event.
He might also want to get to Vancouver to earn some NHL paychecks and make his dream of playing in the NHL a reality.
If Podkolzin can make it into some games near the end of the season it will be a nice learning experience for him to see the speed of an NHL game and get to experience the day-to-day life of an NHL player.
He’s clearly ready for the NHL. Podkolzin has all the traits that a coach will love and his teammates love his playmaking ability.
This will be one of the biggest stories of the season if it gets pulled off. I just don’t believe that the Russian Hockey Federation, SKA and Jim Benning will all be interested in the same path for Podkolzin. It’s going to take some work to get Podkolzin to Vancouver.
Coming into camp for the 2021-22 season is a cleaner transition for Podkolzin as he moves away from his home country. He will then likely get a chance at the Nils Höglander model, where he will get an audition in the top-six. If he fits, then he will stay there.

Coming out of training camp, two newcomers stuck out above the rest. Those two players were Nils Höglander and Jack Rathbone.
Rathbone is now in Utica playing games after a long stint with the Taxi Squad in Vancouver. He’s enjoyed getting back into game action and has looked impressive in the AHL, to say the least. He already possesses two high-end skills that will be crucial for his success at the NHL level.
The first skill that pops off the screen is his skating ability. He glides through the neutral zone with ease and has good agility around the blueline. His agility is key when he has the puck, Rathbone has shown that skating past AHL opponents is not a problem for him. He has a fake shot, jump-step that gets him around defenders and gives him a shoot-pass option as he sneaks down from the left point.

He’s a dynamic passer through the neutral zone and has already impressed his coach, Trent Cull. “He snaps pucks like an NHLer,” said Cull after Rathbone’s first game with the Utica Comets.

Both of the Canucks’ 2017 second-round picks are beginning to knock on the door for a shot in the NHL.
If we were in a non-COVID year, both of these guys would be getting NHL games late in the season.
This year, I’m not so sure.
Of the two, Kole Lind is likely closer to getting his shot. He produced at a solid rate last season in the AHL and has been used in some important roles this season for the Comets. He is shooting the puck well and continuing to be aggressive and annoying on the forecheck. One Comets player said, “you’ve got to get him a muzzle every now and then,” when asked about Lind’s active voice on the ice.
The one thing that might give Jonah Gadjovich an advantage is that there seems to be a developmental plan in place for Lind as he is making the transition to centre and that is an important thing to Trent Cull.
Gadjovich is an interesting case, as everything just seems a bit better in Gadjovich’s game this season. “Overall, I feel better mentally and physically,” said Gadjovich. “I feel more confident, I feel like I’m getting to pucks first this year, more often than I was before. I feel stronger on pucks, I feel stronger in front of the net, I feel like my hands are better in front of the net, I just feel like I have overall just improved my game. I think that for me it’s just about being confident and playing with that edge. I’m just trying to do my job.”
His success needs to be talked about, but there are still some things that I’m sure Gadjovich wants to work on before he gets his NHL shot. He’s made big improvements on the ice and it sounds like it came from a lot of work in the offseason on his body and mind. Whatever it is, it’s working and if he continues to play at this rate for a few more weeks, there’s a path to the NHL.
Gadjovich’s effort level is comparable to Zack MacEwen’s drive on the ice. Both players understand that they have a job to do and it doesn’t require dropping the gloves every night. They are skilled, strong players. MacEwen has a good step and a half on Gadjovich and that would be the area where another offseason of training could do wonders for. He’s not slow in the AHL, but the NHL is a lot faster and you have to make decisions that much faster if your feet can’t create extra space for you.
It would take a few injuries to the forward group for Gadjovich or Lind to get called up. Sven Baertschi, Tyler Graovac and Lukas Jasek could also be options above those two on the depth chart.

What a treat Nils Höglander has been this season.
He brings 100% effort on every shift and is now just beginning to shoot the puck more after developing some confidence at the NHL level in the first few weeks of the season. He does a good job in board battles, scores highlight-reel goals and is excellent at making correct passing decisions while under pressure.
After winning a spot in training camp, he has continued to work hard in every game and makes his linemates better. He came in hot after a half-season in the SHL and hasn’t cooled off at all. He’s been the biggest surprise this season for this Canucks team and has unintentionally laid out the perfect plan for Vasily Podkolzin if Podkolzin ends up coming over at the beginning of the 2021-22 season.
There’s more magic to come from Höglander and it will be the most exciting storyline to follow through the remainder of the season.
Even after those three storylines, there are still some positive things to look forward to for this Canucks team.
Are you a believer that a 17-6-3 finish to the season is possible?
Are you already hoping the Canucks tank for a high pick at the 2021 draft?
What are you excited about as we look forward to the second half of the Canucks’ season?
Uncategorized
Recent articles from Faber