By Lachlan Irvine
6 months ago
The first week of NHL free agency is nearing its end. Contracts have been signed, cap space has been allocated, and management has left their respective offices to go sit on a beach. But one thing has remained constant: J.T. Miller is still a Vancouver Canuck.
Patrik Allvin and Jim Rutherford may not be in a rush to trade their highest-scoring player from last season, but the deadline they’ve set for “having a good idea of where they’re at” with Miller has seemingly moved beyond the draft. At this rate, they risk entering next season with a situation that’s still doubtful to end with Miller signing a contract extension in Vancouver.
But now that every team is finishing their free agent shopping, there are only a few teams left that could take on Miller’s $5.25 million contract, let alone offer him a big extension. And any trade partner the Canucks do business with has to be able to offer the right package for Vancouver’s needs; mainly, a young right-shot defenceman.
Finding stability to the right of Quinn Hughes has been Vancouver’s most pressing issue for the last three seasons, and with a newfound depth of forwards on the team, moving Miller is the easiest possible way to fill that void. Only a few teams have the piece the Canucks want that would see Miller as the right return, not to mention the cap space to bring him on board.
Today we’ll look at three teams who might be worth keeping an eye on in the Miller sweepstakes during the coming weeks, both for their potentially available right-handed defensemen and the fit Miller would find with them in the short and long-term future.

On the final 32 Thoughts podcast of the season, Elliotte Friedman mentioned the Predators as a potential spot for Miller. “I did my last radio hit of the season [in Nashville] on Thursday, they were asking about J.T. Miller. I think it’s a perfect, perfect fit for them, but I just don’t know if they have what it takes to get this deal done,” Friedman said.
The Predators have been making “all-in” pushes for over a decade, and with Juuse Saros’ consistent Vezina-caliber goaltending that plan doesn’t seem to be going away any time soon. GM David Poile has already made a big trade this offseason to acquire Ryan McDonagh from Tampa Bay and wants to add a proven scorer to keep up with the Central after the Avalanche swept them in the playoffs.
As far as returns go, Dante Fabbro is the clear standout candidate. The 23-year-old Coquitlam native spent parts of last season on the top pair with Roman Josi. At $2.4 million, Fabbro can easily fit within the Canucks cap structure, but as an RFA he’s due for a pay raise after next season. 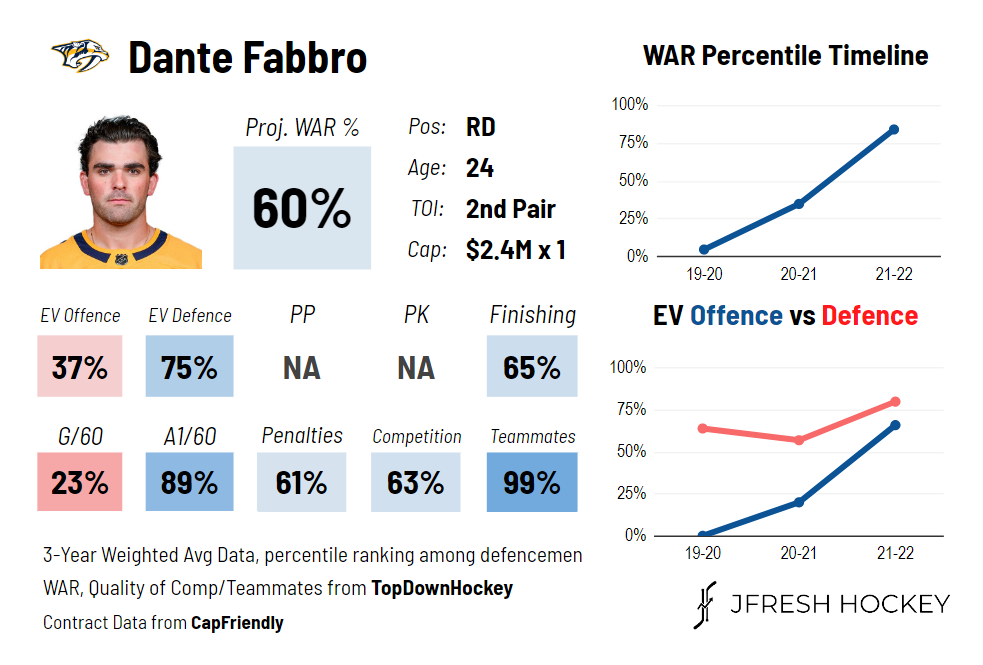 Player card courtesy of JFresh Hockey.
Fabbro’s offensive ability is limited but provides a shutdown skill set that few Canucks currently possess. But based on Friedman’s reporting, the Canucks might be looking for a larger package than just a single defender, and if Vancouver wants a blue chip prospect as part of the return, Nashville likely isn’t going to be the place to find one.

The Devils went from needing top-six help and having one defender the Canucks like to needing top-six help and having two defenders the Canucks like in the span of a day.
The Devils have lost out on the big-name free agents they were hoping to attract, and while Nico Hischier and Jack Hughes have the centre position locked up, Miller could prove to be an upgrade on the second-line wing from Yegor Sharangovich. New Jersey also has a surplus of righty blueliners in the pipeline and is much more likely to give one of them up now to keep up with the titans of the Metropolitan Division.
The Canucks’ interest in Marino has been brought up multiple times over the past few weeks, but Severson has been on Vancouver’s radar since the Benning administration. Like Miller, Severson is due to hit free agency next season, but at 27, presents a much better use of the team’s cap space long-term. Player card courtesy of JFresh Hockey.
Severson is coming off a down year in the advanced stats department but still collected a career-high 46 points. He may also benefit from a change of scenery after Dougie Hamilton took his place on the Devils’ top pairing; in Vancouver, he’d be an immediate fit next to Quinn Hughes.

There’s been a lot of talk about the Islanders’ link to J.T. Miller over the last couple of weeks, and that’s because it just makes too much sense to ignore.
The Islanders went from making back-to-back conference finals to falling out of the postseason entirely in 2021-22. While their goaltending has arguably never been better, Lou Lamoriello’s roster has consistently ranked in the league’s bottom tier when it comes to scoring.
Last year, only Brock Nelson and Anders Lee cracked the 20-goal plateau for the Islanders, and while Mat Barzal is expected to have a bounceback year, their top-six core is only getting older. But the Isles have yet to make any major additions in free agency, which led team owner Jon Ledecky to attempt to calm fans’ nerves in the most Long Island way possible.
Miller would be a much-needed strong addition to the Islanders’ top six while also fitting their gritty style of play. And with a solid defensive group, New York might be willing offer a pretty valuable defender in Noah Dobson. 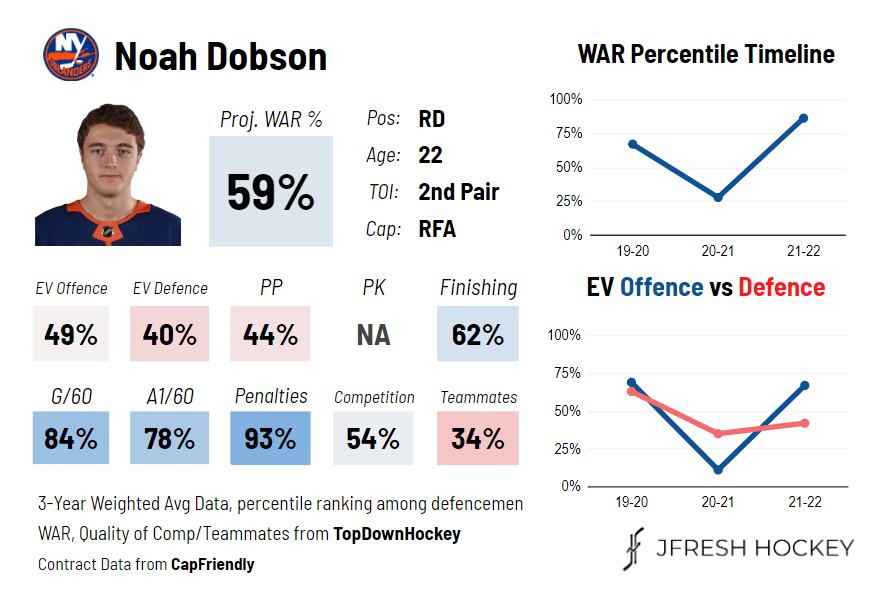 Player card courtesy of JFresh Hockey.
Dobson is coming off a breakout season that saw him post 51 points in 80 games, but the 22-year-old currently sits unsigned as a restricted free agent. With a relatively small sample size of games, it’s possible the Canucks could keep a Dobson contract under the $5.25 million they’re currently paying Miller.
It all depends on how much the Islanders value an older scorer over a developing defender. And once names like Nazem Kadri and Patrice Bergeron officially come off the board, their urgency to bring in top-six help might tip the scales.
More from CanucksArmy:
Uncategorized
Recent articles from Lachlan Irvine