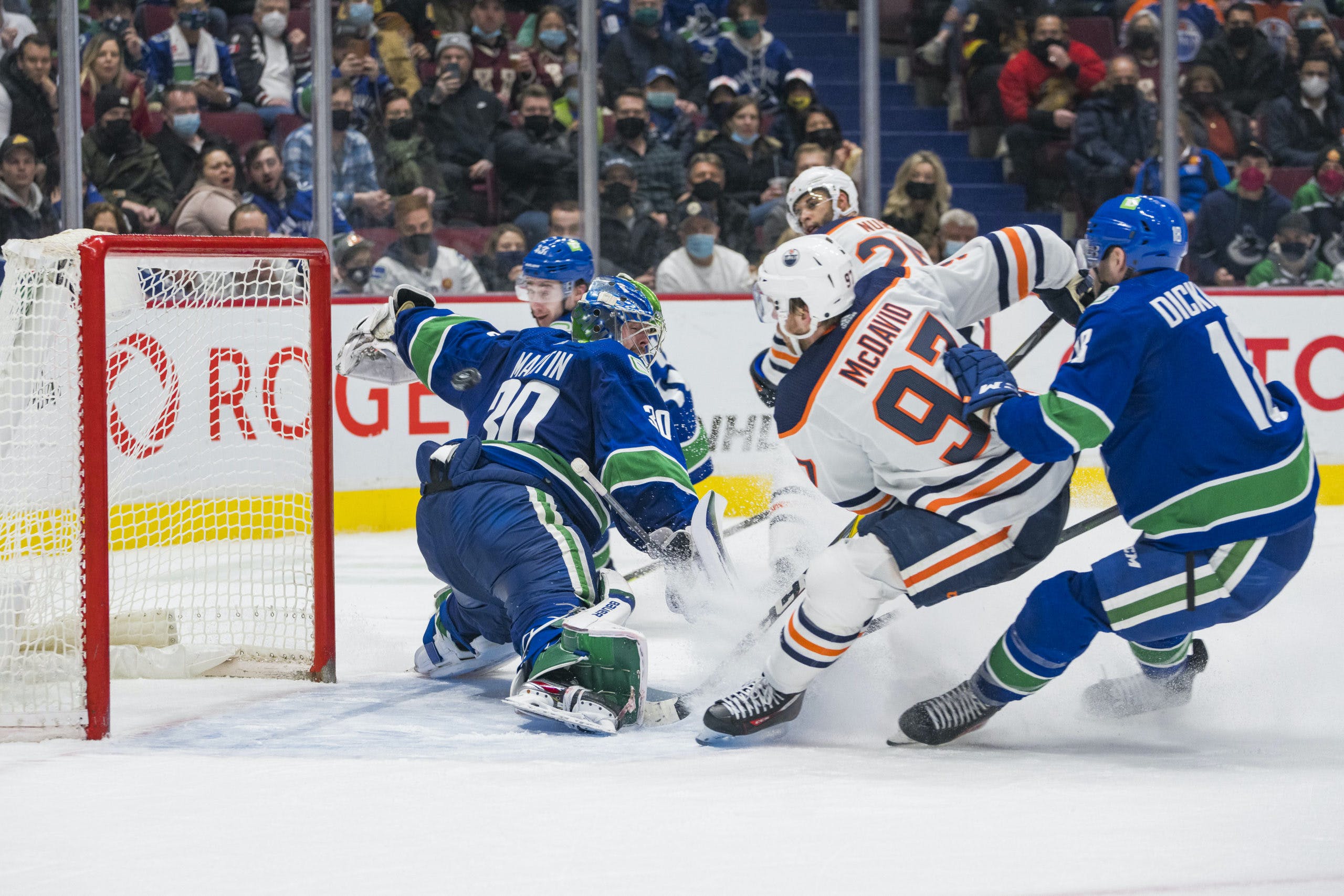 By Lachlan Irvine
1 month ago
A Canucks preseason win?! Someone order the banner!
The Canucks’ 5-4 win over the Edmonton Oilers in front of a sold-out crowd in Abbotsford was as gutsy as they come. A roster missing J.T. Miller and Brock Boeser overcame multiple lead changes, a rough outing for Spencer Martin and a few questionable hits on fan favourites to put away Connor McDavid and Co. two nights after being hammered 7-2 on Monday.
With one preseason game to go before the regular season, the Canucks have taken a whole lot of pressure off themselves by avoiding a winless record in exhibition play. Now it’s all about holding onto the momentum before facing the Oilers in their season opener next week.
Here are my three big takeaways from tonight’s big win.

Elias Pettersson is on a mission

From the moment the puck dropped at the Abbotsford Centre, Elias Pettersson showed the Oilers that he means business this season. On his first shift, Pettersson threw a few big hits, including an absolute bone-rattler on recent hat trick earner Dylan Holloway, before making Connor McDavid take an early hooking penalty.
Even with his strong statement early on, Pettersson hadn’t factored onto the scoresheet by the third period. But then Markus Niemelainen made the poor decision to poke the bear with a blatant hit from behind along the boards.
On the ensuing power play, Pettersson uncorked a blistering wrist shot that Stuart Skinner could only stand in front of and hope for the best.
Not even the Oilers tying the game a few minutes later could put the EP40 genie back in the lamp. With Zach Hyman in the penalty box, Pettersson notched his second of the night with a one-timer straight out of his rookie season.
But finishing the night with a pair of goals wasn’t enough for Pettersson. He wanted more.
“I’m still a little mad from that breakaway I had in the first shift,” Pettersson said, referring to the play where McDavid hooked him in the slot. “I’m just trying to play hard and do my part.”
Let this game stand as a crucial lesson for the rest of the NHL: you won’t like Elias Pettersson when he’s angry.

No, Nils Höglander is not going to the AHL

Nils Höglander has worked his butt off to get back into Bruce Boudreau’s good book, and through the first two periods tonight he was proving exactly where he belonged.
Late in the first period, Höglander outmuscled Philip Broberg for positioning in front of the net as Oliver Ekman-Larsson floated a puck on goal. The rebound popped out to the left side of Stuart Skinner, and Höglander did his best whirling dervish impression to smack the puck in the short side.
Höglander’s energy was evident on every shift, sometimes to the degree where he’d try to do a bit too much or get himself in penalty trouble. But you’re noticing him for the right reasons more often than not, and it was becoming abundantly clear that he wouldn’t start the season anywhere but the opening night roster.
That was until Darnell Nurse clotheslined him midway through the second period.
Höglander was bleeding and exited the game with a towel over his face, but hopefully it turns out to be only as bad as it looked.

It took them a little longer than expected, but the Canucks finally found their clutch instincts again.
A preseason win matters very little in the grand scheme of things. But as with the previous five games, the process is what matters most, and Bruce Boudreau got a lot closer to the full game effort out of his players that he’d been looking for.
The results weren’t perfect, especially when it came to covering Connor McDavid and a few five-alarm fires on the power play that led to Oilers scoring chances. But the Canucks refused to let their foot off the gas, and kept ramping up pressure when a different version of themselves might’ve sat back.
Conor Garland put a prime example on the board when he followed up his initial shot on Skinner and found the rebound loose behind the Oilers netminder.
Games like these are going to be the norm in the “defence is a social construct” world of the Pacific Division, so being able to grind out gutsy wins will pay off if they can hold on to that killer instinct. Just as long as they don’t need to use it too often.
“Everyone knows how we started our preseason and we talked about it, that we needed to put in a good effort for 60 minutes, and I think we did that,” Pettersson said. “Of course there’s stuff we can work on and get better at, but overall I’m happy with our game.”
His head coach added some detail on what he’d like to see improved on moving forward.
“I thought we played fast, I thought we played with energy in the first two periods,” Boudreau said about his team’s effort tonight. “I just think in our own end we’ve got to get better at it. You’ve got to play in all three zones if you want to be successful.”
Editorials
Recent articles from Lachlan Irvine