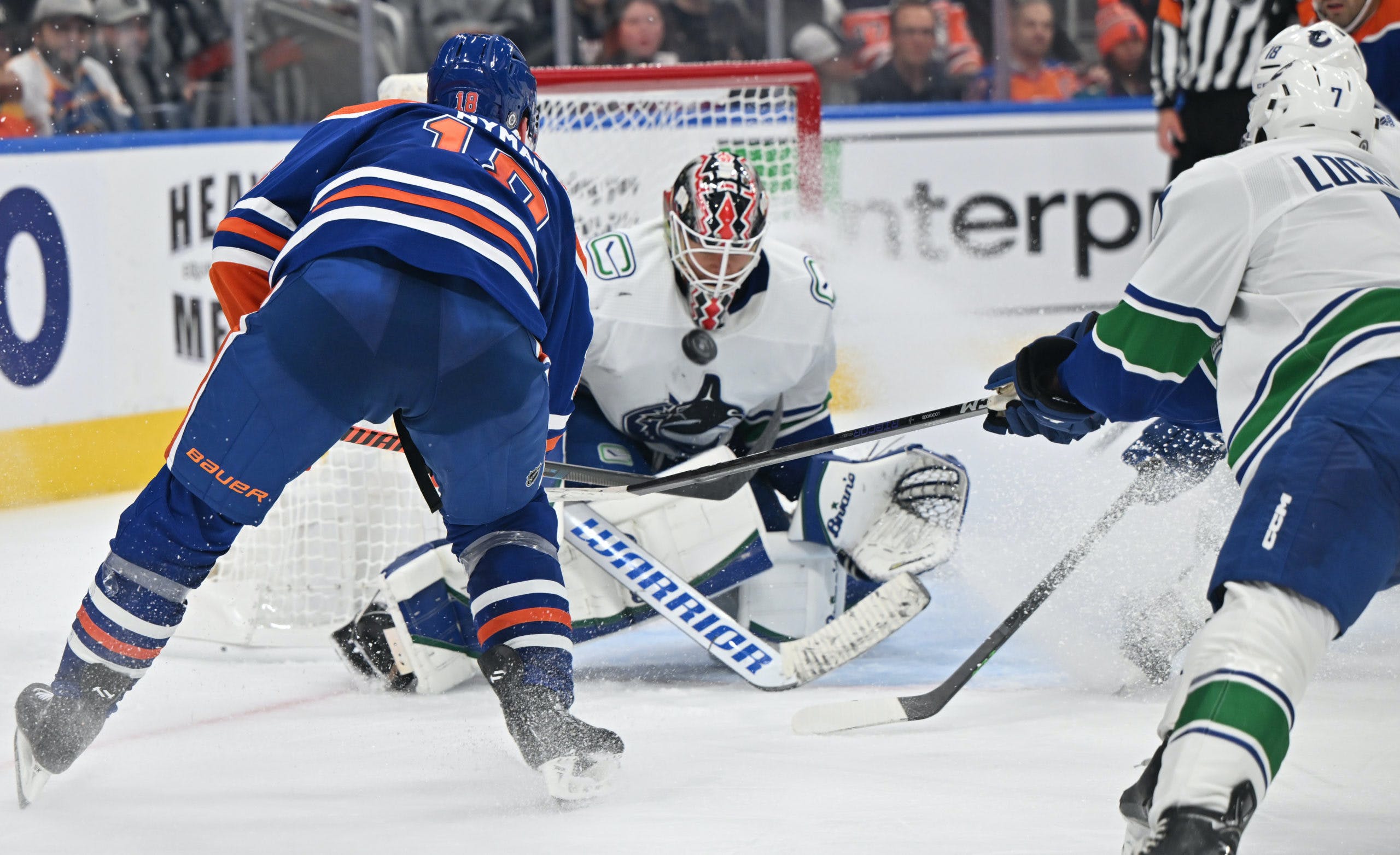 By Lachlan Irvine
3 months ago
It’s only fitting that after playing one of their worst preseason game against Seattle, the Canucks would follow it up by playing one of their best.
Sure, the final score was a 7-2 drubbing by Dylan Holloway and the Oilers. But a much more shorthanded Canucks lineup tightened up in the places they needed to, keeping the score close until the final five minutes.
Here are three important takeaways from the Canucks’ last road game of the preseason.

The Canucks might’ve fumbled the ball at the goal line, but they still deserve recognition for moving it 109 yards.
Vancouver’s effort was called into question big time after their dismal 4-0 shutout against the Kraken. Tonight’s performance was like night and day. This roster was severely shorthanded compared to the group the Oilers iced, so it’s not entirely surprising to see the game end up with a 7-2 finish.
But the score doesn’t tell the full story. The Canucks were only behind 4-2 up until the final four minutes of the game, and they fully controlled play at points tonight. The first period was particularly good for Bruce Boudreau’s squad, as they outshot the Oilers 12-10 and earned three power-play chances.
Important players made much-needed impacts. Nils Höglander potted a gorgeous power-play goal. Vasili Podkolzin was a beast at both ends of the ice, creating scoring chances galore and eating up nearly 20 minutes of ice time.
Conor Garland and Curtis Lazar both played a full 60-minute game, and Garland was rewarded with an extremely lucky break thanks to Cody Ceci.
Simply put, the defensive pieces the Canucks were missing in their game on Saturday returned tonight. They were much tougher on the puck carrier, threw their weight around more and forced the Oilers to chase and draw penalties. The result didn’t end in their favour, but the effort to improve was noticed.
“Hey Lachlan, this sounds a lot like Moral Victory Season again!” Look, the Canucks are 0-5 in the preseason, what do you expect right now?

It looks like we need to add a couple more names to the race for the Canucks’ seventh defender spot: Christian Wolanin and Brady Keeper.
Wolanin was excellent at both ends of the ice against Edmonton, but his crown jewel was this laser precise pass to Nils Höglander on the power play.
Last season the odds of Wolanin making the cut were always slim because of the glut of options on the left side of the L.A. Kings’ blue line, and his name rarely came up during the season. But if Quinn Hughes indeed moves to the right side semi-permanently, Wolanin is showing why he could be a valuable first call-up option from the Abbotsford Canucks.
On the other side, Brady Keeper has been incredibly solid for a guy who’s played just two hockey games in 18 months. Because Keeper is still regaining form since breaking his leg in training camp last season the Canucks will probably like to see him get some proper ice time in Abbotsford before even thinking about a call-up.
But that didn’t stop Keeper from working his way onto the scoresheet by drawing pair of penalties, including goading a certain former Canuck into taking an atrocious trip early in the first period with a smart little deke.
Keeper’s overall night still showed room for improvement – particularly with a few penalties of his own – but there’s no doubt he’s putting himself on the right track for the future.

The stats won’t be kind to Collin Delia, who finished the night with seven goals allowed on 36 shots. But considering where he came from, Delia looked like a different netminder from the one who played in Calgary last week.
Delia is working with Canucks goalie coach Ian Clark to rebuild large parts of his game, and the results are already showing up. His athleticism and cross-crease movement is looking much stronger, his upper body was quieter and much more controlled, and the number of dangerous rebounds went way down.
There’s still work to be done in certain spots. On Dylan Holloway’s hat trick goal Delia wasn’t able to get his pad flush to the ice before the puck snuck underneath his foot, and Holloway’s second was partially due to Delia not challenging out and leaving his blocker a bit low as the Oilers’ youngster moved towards the net.
But these are far from unfixable for Delia if he continues to work with Clark and his goalie coaching staff in Abbotsford over a full season. And judging by the overall strong play of the Canucks’ AHL netminders like Delia and Arturs Silovs so far, the franchise’s goaltending situation is still in great hands.
Editorials
Recent articles from Lachlan Irvine