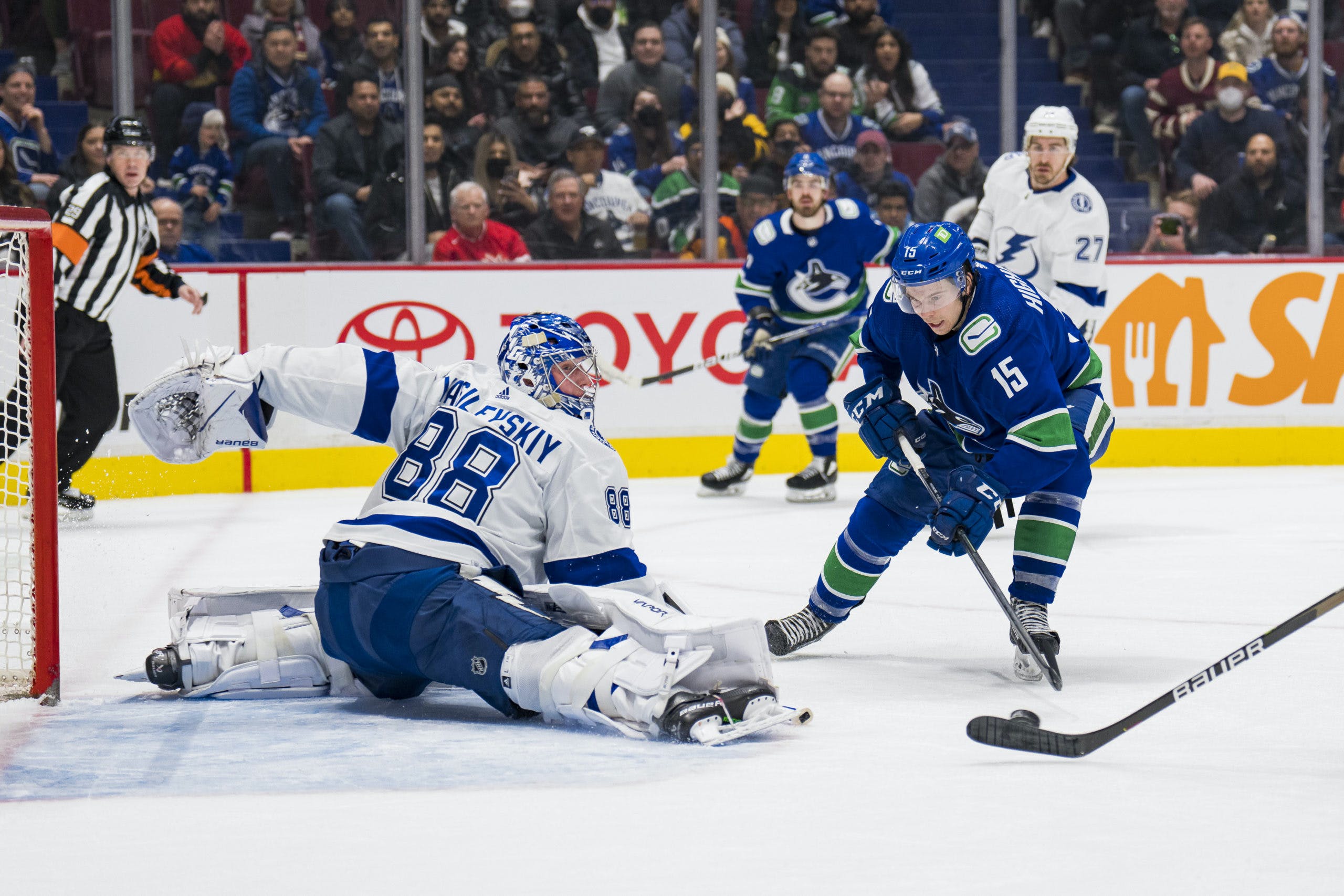 By Lachlan Irvine
5 months ago
There’s a lot an NHL front office can learn from sitting at home and watching the Stanley Cup Playoffs. On-ice experience for players in the spring is undoubtedly priceless, but without it, management groups can watch how the contenders separate themselves from the rest of the playoff pack.
The Colorado Avalanche and Tampa Bay Lightning represent two trains on very similar roster construction tracks. Both spent a large portion of the late 2000s in the basement of the standings, slowly building up their prospect pool before making strong trades to fix holes in the lineup, adding depth through free agency, and returning to regular contention.
For the Canucks, some of the same pieces are already in place. But there are still a whole lot of steps to go before they can reach the same heights as this year’s Cup finalists. So what can Jim Rutherford and Patrik Allvin learn from Colorado and Tampa’s journey here?

The Avalanche might play a style focused on up-tempo play and quick transitions, but that doesn’t mean they don’t have some heaviness built into their lineup. The Lightning are a team designed to make hard hits and wear down their opponents, but they can keep up with a faster pace of play too.
Both finalists have taken their own approach to building a championship-calibre roster, but that hasn’t come at the expense of maintaining a well-rounded team. Sure, the Avalanche might not have the strongest goaltending tandem, and the Lightning have sacrificed a lot of youth to keep their Cup defence going with a veteran-laden lineup.
But they’re not completely devoid of talent in those places either. Darcy Kuemper held his own against Tampa in Colorado’s series-opening win, while the Bolts have gotten key contributions from younger players like Ross Colton and Anthony Cirelli. For the Canucks to find their own version, it’ll involve finding pieces that provide a different element from their stars like Elias Pettersson and Quinn Hughes but don’t take away from what makes them successful.

Building a perfect defence is hard. Finding six blueliners who mesh perfectly with a specific partner, but can also be trusted to fill in with another if someone gets hurt, is even harder.
That’s probably why the Lightning have elected not to build their defensive group around finding the perfect fit for Victor Hedman or Ryan McDonagh. Tampa GM Julien Brisebois has routinely loaded the right side with as many low-risk, short-term fits as possible, saving cap space for their stacked left side featuring Hedman, McDonagh and Mikhail Sergachev.
Tampa’s left-side defence has provided plenty of the team’s offensive output during the playoffs. Meanwhile, the Lightning’s entire right side of Jan Ruuta, Erik Cernak, and Zach Bogosian have combined for just six postseason points.
However, Ruuta, Cernak, and Bogosian’s combined AAV for the season was also just $5.1 million. For comparison, before the trade deadline, the Canucks had $5.5 million allocated to Travis Hamonic and Tucker Poolman alone.
Swapping out players paid big bucks for specific roles like Hamonic and Poolman in favour of cheaper, versatile options like Luke Schenn and Travis Dermott will put Vancouver on much better footing. The Canucks have one of those examples currently on their roster in Luke Schenn.
Before returning to Vancouver last offseason, Schenn’s two-year stint with the Lightning saw him bounce up and down the lineup filling in on various pairings across exactly 82 games. And yet, Schenn left Tampa with two Stanley Cup rings on his hand.

Both the Lightning and the Avalanche have their current-era version of “The Trade”. For Tampa, it was the move that brought Mikhail Sergachev from Montreal in exchange for Jonathan Drouin. For the Avs, it was the big three-team deal that made Matt Duchene an Ottawa Senator and brought Bowen Byram and Sam Girard to Denver.
In both of those deals, Joe Sakic and then Lightning GM Steve Yzerman were patient enough to let the right deal for their big-name trade chips come to them. Their trade partners in those deals, Montreal and Ottawa, were both desperate to hold their respective playoff windows open by any means necessary, and it gave the slow and steady front offices all the leverage.
Fast forward to today, and all those players have been major components of Colorado and Tampa’s massive resurgence. Combine that with similar moves they’ve made in the last half-decade, and both finalists have a lot of other teams’ all-in pushes to thank for their current rosters.
The Canucks have been one of those reactionary teams in the past, but now Vancouver is potentially facing a similar opportunity this year in the form of J.T. Miller. Allvin and Rutherford elected not to trade Miller at March’s deadline when the Canucks were still in the playoff hunt and the right offer didn’t present itself. But this season, a few more teams might be prepared to pry open their Cup window with a crowbar by acquiring Vancouver’s leading point-getter, and the price they’d be willing to pay for him could be steep.
All it comes down to is holding firm on that price tag. If such a deal never comes through, perhaps management holds onto Miller and the major scoring output he still provides. But if they’re willing to wait for the perfect offer to present itself, it could be the catalyst for a Cup contending renaissance.
More from CanucksArmy:
Uncategorized
Recent articles from Lachlan Irvine