2021-22 report cards: How the Vancouver Canucks’ “inbetweeners” fared this season 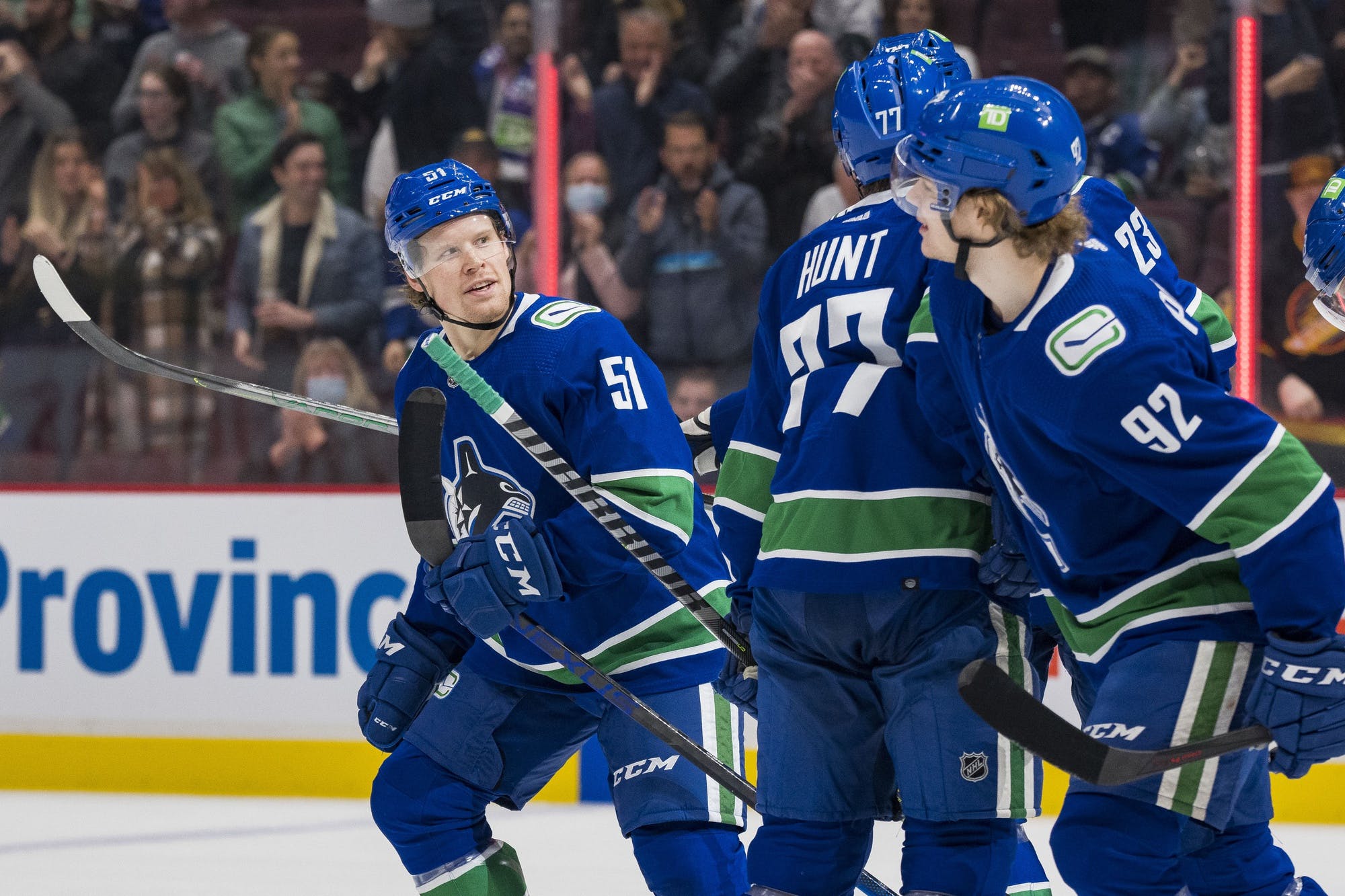 By Lachlan Irvine
8 months ago
To call the 2021-22 Vancouver Canucks season ridiculous would somehow be an understatement. Nearly the entire team started the season ice cold during the first two months of the year, but a coaching change and front office overhaul were all it took to get Vancouver back on track. Easy, right?
Some players like Thatcher Demko and J.T. Miller were consistently strong throughout the season, but every Canuck had their moments that brought the team to within a few points of the Stanley Cup Playoffs. So over the next couple of days, we’re going to grade 29 players that donned the blue and green this season.
First up is the “inbetweeners” — the players who spent time with either the Abbotsford Canucks or sitting in the press box, but received extended looks when injuries and other ailments arose with the big club roster.

Do you remember watching Justin Bailey play in 14 regular season games? What do you mean ‘no’?
He did play a small bit of penalty kill time across his multiple call-ups from Abbotsford, but that’s about it.
The 26-year-old winger put up 27 points through 30 games with Abbotsford this season, but didn’t do much during his stint with Vancouver, putting up zero points through 14 games.

For a seventh defender like Kyle Burroughs, playing in 42 NHL games is an accomplishment within itself.
Burroughs played himself onto the opening night roster with a strong showing in the preseason. But as Luke Schenn and Brad Hunt shook off slow starts, Burroughs struggled to stay in the lineup due to his lack of scoring ability.
Bad injury luck certainly didn’t help matters after two separate injuries kept him out of action for a large chunk of the season’s second half. But his time on the ice was nothing if not efficient and devoid of many mistakes.

When it comes to the Canucks’ depth options, you could basically divide players up into two groups; “First Half Guys” and “Second Half Guys”. And Justin Dowling was a bonafide First Half Guy.
Dowling’s decent preseason earned him the fourth line centre role on opening night while Tyler Motte was out with an injury. After Motte returned in mid-November Dowling’s role was quickly cut down, and once Bruce Boudreau became coach, Dowling saw the ice just eight more times before being sent down to Abbotsford for the rest of the year. His four points in 22 games were just okay.

As for Second Half Guys, Sheldon Dries is easily the best of the bunch.
Before being called up to the NHL Dries was a crucial piece of the Abbotsford Canucks’ offensive attack, finishing second in points with 62, including a team-leading 35 goals. In Vancouver, Dries played a far smaller depth role, but that didn’t stop him from a respectable trio of points in only 11 games.
Dries did well enough to earn some power-play chances late in the season, but it’s still hard to see him cracking a Canucks lineup with a healthy forward corps next year.

Will Lockwood might not have scored any points in his late-season, 13-game stint with the Canucks, but he sure made his presence known.
Lockwood didn’t let his 5-foot-11 height deter him from playing a hard-hitting, aggressive game that agitated taller opponents with regularity. If any forward prospect has the inside track on a roster spot this October, Lockwood is definitely at the top of the list.

Expectations for Nic Petan were strangely high heading into the season. And while he did fantastic as a scorer at the AHL level, the kid from Delta struggled to adjust to a bottom-six role in Vancouver. Two assists in 18 games plus a small bit of power-play time were the highlights of his season, and the decision to play him in the shootout against Ottawa two weeks ago will likely inadvertently be his lasting legacy at Rogers Arena.
Be sure to check back tomorrow when we look at the Canucks’ top six forwards!

Do you think you know who will take home hockey’s ultimate prize? Do you think you can put together the ultimate playoff bracket? Sign up for a FREE ACCOUNT for the Daily Faceoff Playoff Bracket Challenge presented by PointsBet Canada to secure your spot for a chance at prices and glory! Sign up here.
Uncategorized
Recent articles from Lachlan Irvine