12 of the best prospect/pick/player combos available to the Canucks in a trade involving J.T. Miller 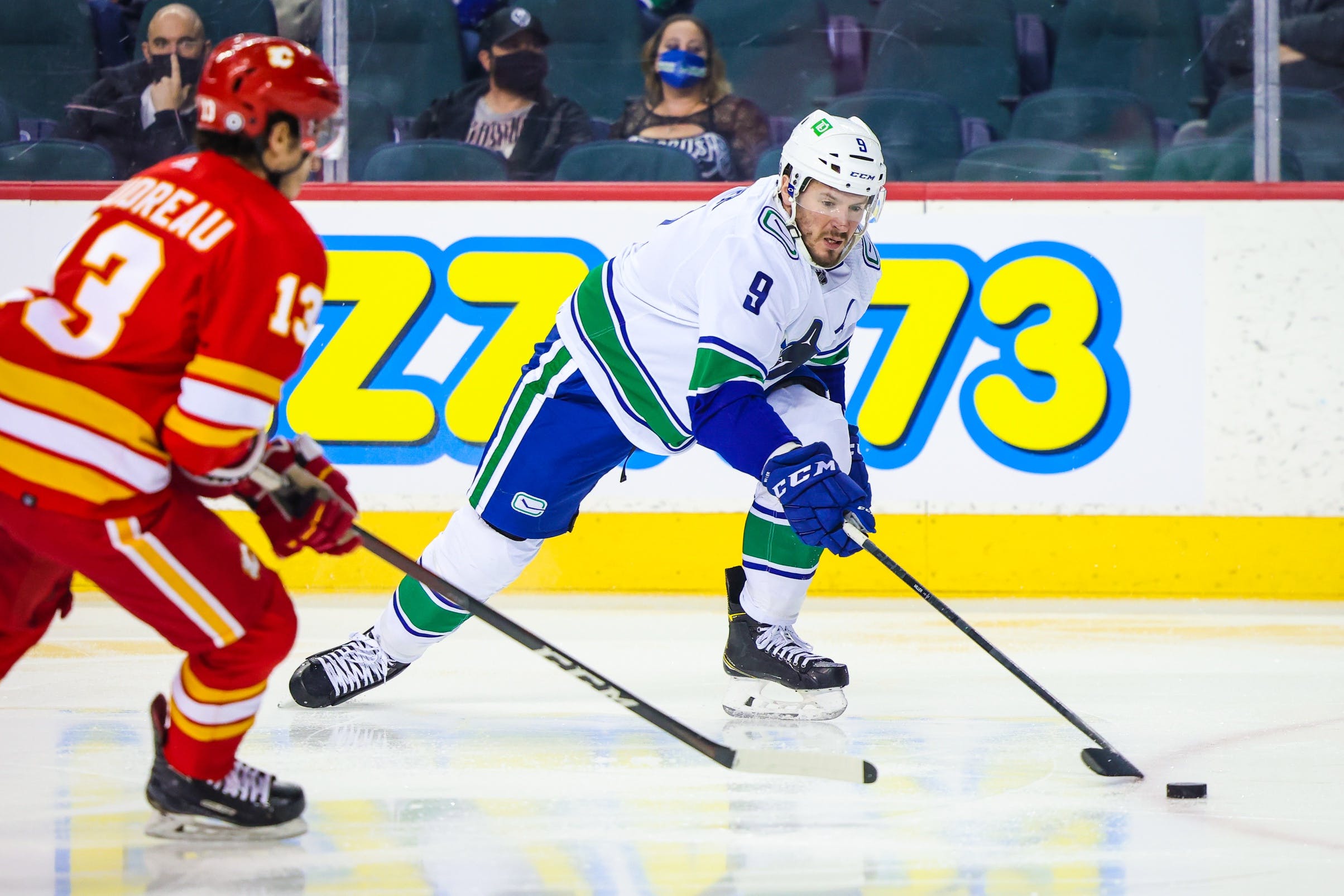 By Stephan Roget
10 months ago
The Vancouver Canucks are coming up on a full week off, and won’t hit the ice for any game action between February 2nd and February 8th.
Off the ice, however, things continue to heat up. Regardless of where the team sits in the standings, all indications are that GM Patrik Allvin and his front office Chipnucks are going to spend the period between now and the 2022 Trade Deadline selling off as many assets as possible. The sale, it seems, is on.
Jaroslav Halak, Tanner Pearson, Tyler Motte, and others are all clearly on the block. Figuring out returns for that set of players, however, is relatively simple. They’ll be exchanged for the maximum package of future pieces available — probably in the form of draft picks — and that will be that.
The potential selling off of JT Miller, however, should prove to be significantly more complicated.
Sources around the league are now saying that the Canucks have a very specific, three-piece asking price if they’re to move Miller between now and the Trade Deadline. Most have pegged that asking price at “a prospect, a pick, and a player,” but we can probably narrow that down even further to “a near-NHL-ready bluechip prospect, a first round pick, and a young roster player in a position of need.”
That makes for a hefty return, but it’s thankfully still open-ended enough to attract plenty of suitors.
We know, we know. Some of you are sick of the Miller trade talk. But with no action on the ice to speak of for the next week, we have no choice but to track this seemingly-inevitable franchise-altering transaction until it happens.
And when it happens, these are the sorts of packages that we could see headed back to Vancouver in the exchange.

The Ducks are an odd team to be in the potential mix for Miller. They weren’t supposed to compete much at all this season, and yet here they are, one point away from first in the Pacific Division more than halfway through the year.
That said, Anaheim is between phases, and that doesn’t leave them in a good place to offer up much for Miller. Any of their truly top-tier young talent — including Trevor Zegras, Troy Terry, and Jamie Drysdale — are firmly untouchable. That leaves them with a solid but unspectacular RHD prospect in Moore, the talented-but-inconsistent Comtois, and a first rounder that could fall anywhere between the low-teens and early-20s.
All in all, a rather uninspiring package.

As we discussed earlier in the week, this becomes a very different negotiation if the Bruins are willing to part with Brandon Carlo. But they almost certainly aren’t and, in fact, the only youngish roster player we can realistically see them moving is DeBrusk — a player who the Canucks have little use for this year and cannot afford to keep next year. A recent, bluechip first round pick in Lysell and a late first round pick are more attractive than DeBrusk, but not enough so to move the needle much on this offer.

The Flames simply don’t have much of what the Canucks need right now. They’ve got a trio of B+ offensive prospects in Pelletier, Conor Zary, and Matthew Coronato, none of whom are good bets to ever become as good a player as Miller is right now, and none of whom fill a particular need in Vancouver. Pelletier, a natural left winger, is probably the best fit of the bunch.
Assuming names like Rasmus Andersson, Oscar Kylington, and Andrew Mangiapane are 100% off the table, that leaves the rather uninspiring Dube and a first round pick in the 20s to go alongside Pelletier, which in turn leaves a lot to be desired.

It’s no surprise that the Hurricanes, a franchise that seems to be well-stocked in virtually every regard, can put together a compelling offer for Miller. The real question is whether they actually want to.
The obvious centrepiece of this transaction would be Necas, a talented forward who can play all positions, but who is already getting squeezed out of Carolina’s top-six picture at the age of 23. Assuming Necas is part of the deal, the Canucks can’t really ask for a true top-tier prospect in addition — sorry, Seth Jarvis fans — and so we’ve selected Keane, a two-way RHD ready to burst onto the scene. That first rounder is bound to be a late one.

The Colorado Avalanche are brimming with talent, but they’re also gunning for the Stanley Cup, and loathe to give too much of it up. GM Joe Sakic has made it pretty clear that A-list youth like Alex Newhook and Bowen Byram are not up for grabs, and so Allvin and Co. will have to set their sights a little lower in negotiations with the Avs.
Barron belongs in the next tier of Colorado prospects, and he’s a sizeable RHD with good offensive instincts who has already gained a taste of the NHL in 2021/22. He could be joined by Jost, a versatile forward with strong defensive instincts and PK ability, and who might still have a breakout left in him at age 23. Count on the first round pick being somewhere in the neighbourhood of 30th overall, and value it accordingly — as if it were a high second rounder.

As a team a lot closer to the bottom of the standings than the top, the Blue Jackets don’t make a lot of sense as a Miller destination. But they are reportedly hoping to make a bit of a quick turnaround, and Miller is from Ohio, so it’s not entirely out of the realm of possibility. And they do have the pieces to make it work.
There are actually multiple Columbus prospects that the Canucks might find intriguing, starting with recent first rounder and all-around RHD Ceulemans and continuing through the lightning-fast Foudy. Peeke is a 23-year-old defence-first RHD who can help out now and in the future, and that first round pick promises to be higher than any other one we mention on this list. Don’t count the BJs out quite yet.

The Wild have been in on Miller longer than anyone, but that doesn’t put them any closer to actually acquiring him. We’ve heard it on good authority that Matthew Boldy is officially not for sale, and chances are good that Rossi isn’t, either — but either he gets thrown into the trade, or there’s no trade to be had.
As a hulking pseudo-reclamation project on a brand-new cheapish contract, Greenway has some appeal, and a late-teens-to-early-20s first rounder is what it is. But this transaction would be all about the centrepiece, and in that regard, it’s Rossi (or Boldy) or bust.

There hasn’t been much word about the Predators being interested in Miller, but they do seem to pull off a surprise trade every year or so, and they are competitive in 2021/22. There’s an obvious hole in their top-six that Miller could fill, and Nashville has the organizational depth to pay for him, too.
The ask starts with 2021 first round and top prospect L’Heureux, a dynamic scoring left winger. Then the Canucks have two young RHDs worth pursuing in Carrier and Dante Fabbro. While Fabbro might be the preferable piece, he’d also be the harder of the two to pry, and so we predict that the Canucks might have to settle for Carrier. Either way, they’re getting someone they can use right away — and the first rounder is just a bonus.

Everyone and their dog is predicting a Miller return to New York, but the Rangers aren’t the only local team with their sights set on him. The Islanders are still one of the top defensive teams in the league, but they’ve struggled to generate offence all year long, and Miller could be the tonic to their current ailment.
With some hard-earned cap space to spare, GM Lou Lamoriello can make something happen here, but it’s going to cost him. The young player part of the package pretty much has to be Dobson, a dynamic RHD with top-pairing potential. Otherwise, the Canucks just won’t be interested. If Dobson is involved, expect the attached prospect to be a bit underwhelming: we’ve picked out Koivula, a bulky center with a two-way profile. The first round pick could be a bit of a wildcard, and is currently slotted to be in the top-ten — though the addition of Miller could impact that considerably.

If you’re sick of reading about Miller trade proposals, you’re definitely sick of hearing about Schneider and the Rangers. But the smooth-skating, hard-hitting, shutdown-doing 20-year-old remains the best fit for the future of the Canucks blueline that might possibly be available, and so it still makes sense to target him.
We’ve made a bunch of other suggestions surrounding the Rangers, with their first round pick being a typical component. If a young player needs to be part of the deal, then Chytil makes sense as a center with top-six potential that will probably never realize it in New York. If Morgan Barron counts as a young roster player, he’s another intriguing possibility.

It wouldn’t be shocking at all to see GM Allvin and POHO Jim Rutherford turn to their former franchise in seeking out a Miller trade partner. The Penguins are still trying to squeeze another Cup run or two out of the Crosby/Malkin/Letang core, and Miller certainly goes a long way toward reinforcing the current roster. Unfortunately, the cupboards are a bit bare after all those previous Cup runs.
It makes a lot of sense for Kapanen — a player Rutherford drafted, traded away, and then traded back for again — to be a part of the deal, and he’d make a fine medium-term offensive fill-in for Miller. Same goes for Marino, a quality top-four RHD that Rutherford rescued from the wilds of Edmonton. But Poulin is the only real prospect of note that could be added on top of Kapanen or Marino, and he’s a B+ asset at best. Combine that with a late first round pick, and it’s hard not to see Pittsburgh’s offer as lacking. Hopefully, nostalgia isn’t a factor here.

For the clicks alone, the Maple Leafs seem to be at the center of every major trade discussion, and they’ve wormed their way in on Miller, too. Value-wise, Toronto can definitely put together something worthwhile. Liljegren is a dynamic young RHD with a ton of upward potential, and Robertson is an undersized but talented left wing just waiting for his chance at the NHL level.
It’s more difficult, however, to imagine the Leafs somehow managing to clear enough cap space for Miller this year and next. That would have to involve maximum retention by the Canucks, and that would incur a cost over and above the value represented by this package.