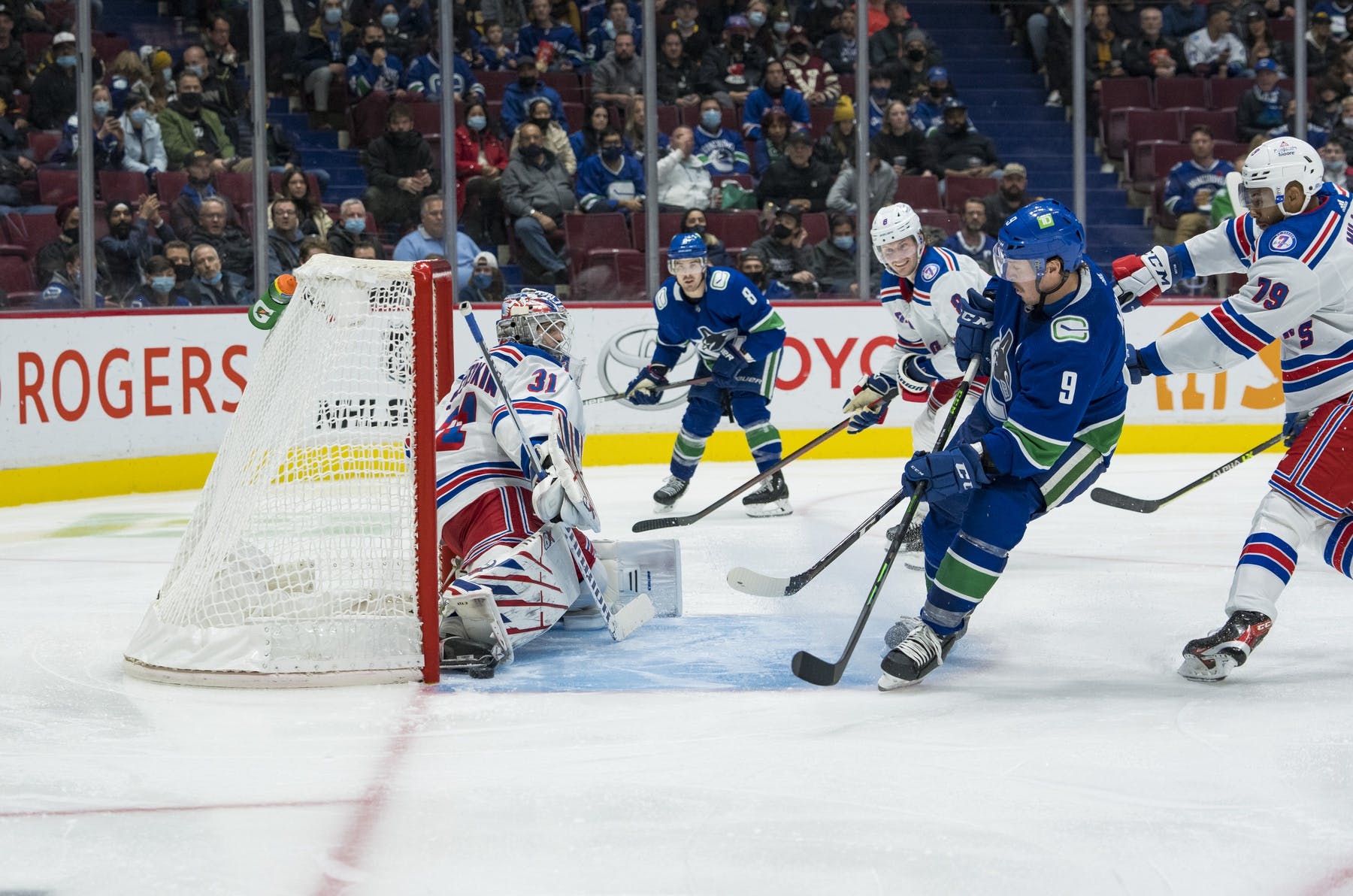 By Stephan Roget
1 year ago
Folks, we don’t like to consider ourselves rumourmongers here at CanucksArmy, but you know what? To heck with it. Today, we’re going to monger some rumours.
Specifically, there’s solid word on the street — courtesy of our own Frank Seravalli — that the New York Rangers are actively and heavily pursuing a trade for JT Miller.
In fact, the exact phrasing used was, “all over [him].”
If Jim Rutherford and his incomplete Vancouver Canucks front office has Miller anywhere near the open trade block, there’s no way that the Rangers are the only team interested. He’s a top-20 point-scorer who can play every forward position in every game situation, to say nothing of his litany of intangibles. Best of all, he’s available for the next year-and-a-half at a scant cap hit of $5.25 million, a number that can be reduced by up to 50% if the Canucks retain salary.
If Miller is really on the market, even tangentially, he’s the season’s hottest item.
So, in order for them to be truly “all over” Miller, the Rangers must be offering something pretty significant in return.
Below, we try to suss out what pieces they: A) might be willing to part with, and B) might be enough to convince the Canucks to part with Miller.

This author has already extolled the virtues of Braden Schneider at least once before, so we’ll try to avoid being repetitive here. In short, Schneider is a bit of a gamble as a centrepiece return for someone as high-profile as Miller — he’s just now breaking into the NHL as a rookie pro — but he’s definitely one of the high-reward variety.
The 2020 first-rounder is a big, defence-first defender who hits like a Buick, but he’s also quite mobile, and not just “for his size.” Schneider is a good decision-maker anywhere on the ice. He makes a strong first pass, shows above-average offensive potential overall, and can get up or down the ice as quick as he needs to.
If you’ve read this far, you’re probably thinking exactly what we are: that Schneider could very well be the perfect long-term partner for Quinn Hughes. The Canucks’ cornerstone blueliner can’t ride shotgun with Luke Schenn forever, and Schneider is someone who can cover Hughes’ forays up the ice, while not holding him back offensively at all. At best, Schneider could even develop some chemistry with Hughes and actually elevate his production. And he’s someone they could keep around for a long time.
That’s a lot of “ifs,” sure, but they all add up to a bet worth taking. Right now, Rutherford and Co.’s ask from the Rangers for Miller should start with Schneider.

When the Canucks come calling for a right-handed defender, Lundkvist will almost certainly be the one that the Rangers prefer to move. In truth, he’s not a bad piece at all — he’s effectively cracked the NHL in his first season in North America, though he’s currently doing a stint in Hartford. Lundkvist is a smooth skater and an efficient puck-mover who seems destined to eventually put up numbers, even if he isn’t as a rookie.
But Lundkvist is definitely a defender of the undersized, two-way variety, and that’s something that the Vancouver blueline already has in spades. Lundkvist, a 2018 first-rounder, could be argued as being roughly as valuable as Schneider, but the fit is nowhere near as good, and Lundkvist is two years older. Accepting him instead would be a compromise, and the Canucks are under no pressure to compromise on a Miller trade at the moment.
Taking both Schneider and Lundkvist definitely works, though, if that’s ever on the table.

Chytil is a 2017 first-rounder who has established himself as an NHL player, but who has yet to find much offensive consistency over four partial seasons. He’s still touted as a potential top-six center, but the time is running out on that prognostication, and Chytil really figures more as a middle-six option at best, where his strong forechecking and defensive responsibility could come in handy. Alternatively, he might just be a winger.
Chytil makes some sense as a temporary Miller fill-in who could also be a buy-low candidate to replace some of Miller’s offence in the long-term. But he shouldn’t be a focus of the trade at all.

Kravtsov stands out as an asset that the Rangers are probably going to move at some point, given that he requested a trade and went back to the KHL this season. Though tensions seem to have cooled of late, it’s at least fair to say that the 2018 ninth overall pick is no longer untouchable.
Kravtsov is a multifaceted offensive talent who should not be mistaken for a one-dimensional sniper. He can hustle, he can dangle, he can use his large frame, and he’s not too shabby in his own end.
That said, while Kravtsov is a valuable piece, he feels a bit redundant to the younger and equally-talented Vasily Podkolzin. That’s especially true given that the Canucks would also likely hang on to Brock Boeser in the event of a Miller trade. Kravtsov is a great player, and he shouldn’t be turned down by any means — but he isn’t enough of an obvious fit to be a target here.

The Rangers’ most recent first-round selection at 16th overall in 2021, Othmann is a lot for opposing teams to handle. His whole game revolves around zooming into the offensive zone at top speed and letting loose with his lethal shot. If that doesn’t work, he’ll probably skate into someone next. Despite his average size, Othmann is relentless, and his skating is standout enough to carry over to the next level.
He actually makes a lot of sense as a long-term sub for Miller’s oft-held spot on the left wing, where the Canucks are thin overall. Othmann’s age is also a bonus. Be warned though, he’s got nearly a goal-per-game going in the OHL right now, so the Rangers will be in no rush to offer him up.

The Rangers are the top team in the Metropolitan Division and hold the second-best point percentage. That probably places their first-round pick somewhere in the late teens to early-20s at best, and if they trade for Miller, that means they’re gearing up for a playoff run, putting it even later. This first-rounder would be a throw-in for a player as valuable as Miller, not the main course.

The Rangers have two picks in the 2022 second round, their own and that of the St. Louis Blues. Both will be in the late-50s to early-60s. These picks are garnish at the most.

Future draft picks, like the Rangers’ 2023 first round pick, could be in play. That said, those picks are a long way off from joining the Canucks’ current core, and that has to be considered a mild negative.

Barron is a massive, massive center, and he uses that size to “physically dominate” the center-ice position, even if he doesn’t necessarily do so on the scoreboard. Barron is ultra-competitive, focuses on his own end first, and goes to the difficult areas in the offensive zone. He probably won’t ever crack an NHL top-six, but he could one day be the sort of checking center that teams salivate over. Think a Paul Gaustad or Brian Boyle in their primes.
As far as the Canucks are concerned, Barron could be a fit for the role they had once envisioned for Jason Dickinson, and he’d add some much-needed strength down the middle. In other words, he’s a fantastic secondary or tertiary piece to target in a Miller trade.

Skinner stands out for his occupational name and his status as the Rangers’ best young RHD that is not Schneider, Lundkvist, or Adam Fox. He was drafted as a physical defensive defender and a penalty-killing specialist, but he flashed enough offence in the OHL post-draft to give some hope that he might be something more.
In any case, Skinner has been a project prospect ever since being selected in the 2019 fourth round, and that isn’t changing anytime soon.

Selected in this past draft’s third round, Korczak has drawn some attention in the WHL for his stellar and deceptive puckhandling skills. He has a skill set that should translate into the NHL eventually, though it would probably have to be in a top-six role, and he’s not guaranteed to progress that far. He’s not a bad piece at all, and even one worth adding to the Canucks’ prospect cupboard as a right-handed center with a high ceiling, but he’s not a primary piece of any return for Miller.

There’s no surprise that this author’s ask starts with Schneider.
From there, the Rangers should have to add either their 2022 first-round pick or Othmann, with the Canucks probably preferring Othmann and the Rangers probably preferring the pick.
For Miller at full price, that’s probably enough. But if the Canucks retain on him, dropping his cap hit as low as $2.625 million for this year and next, New York would have to throw in another piece.
Let’s hope it’s Barron.
So that makes:
Braden Schneider
Brennan Othmann/2022 First Round Pick
Morgan Barron
Is that an offer you would accept? If not, what would it take? Let us know in the comment section.
More from CanucksArmy:
Uncategorized
Recent articles from Stephan Roget