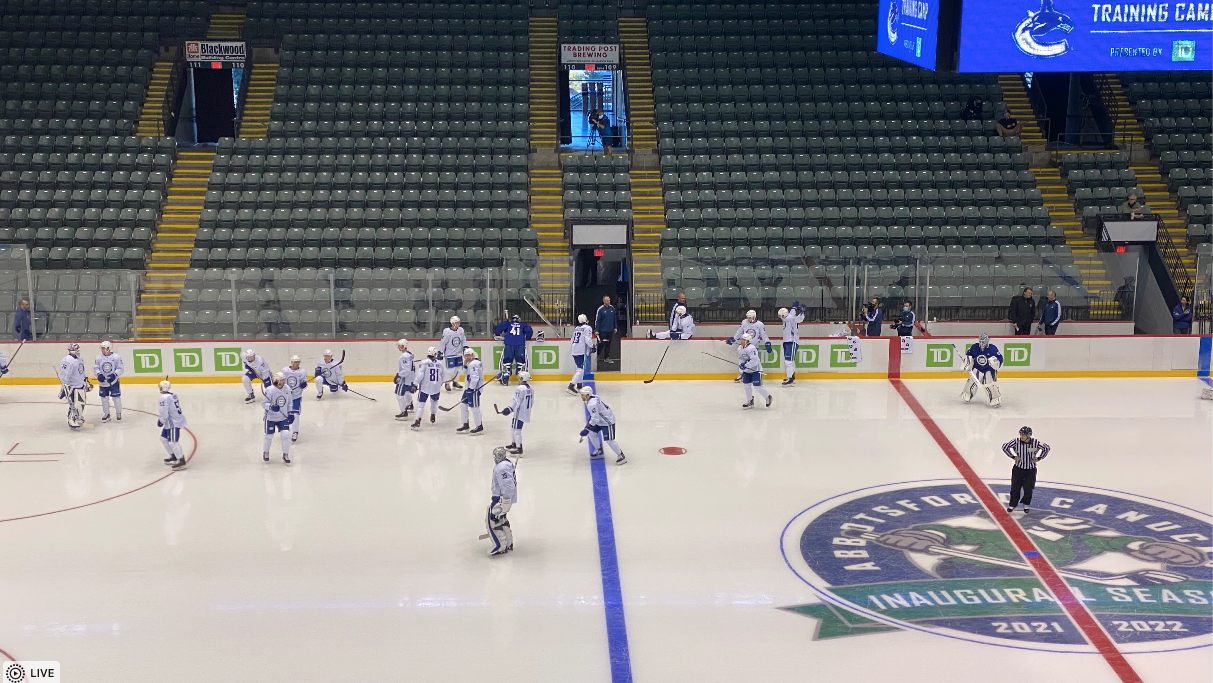 By Faber
1 year ago
Comments
It’s been a tough go for the Abbotsford Canucks over the past few weeks. They have had games postponed due to cross-border travel worries before Christmas and then saw more games in Manitoba postponed before New Year’s due to many players on Abbotsford contracting the COVID-19 virus over the holidays.
There will not be much rest in the month of January if the Canucks are able to get on with their scheduled games. The Canucks are going to have five sets of back-to-back games this month and it all kicks off this Thursday with four games in five nights.

The #AbbyCanucks game on Jan. 5 against the Bakersfield Condors has been moved to Jan. 6 at 7 pm at @AbbyCentre.

All tickets that have been purchased are valid and all ticket holders are welcome to attend the game.

After COVID ran through the team, CanucksArmy has been told that over the past three days, more and more players have returned with healthy bodies and no players had worrisome symptoms due to COVID-19. Every player and staff member on the Abbotsford Canucks is double vaccinated and that seemed to help limit the symptoms of COVID-19 to just that of a winter’s cold.
The Abbotsford Centre is set to welcome fans at 50% capacity on Thursday, Friday, Sunday and Monday of this week as the Bakersfield Condors are travelling into Abbotsford on Monday evening.
Advertisement
Ad
Advertisement
Ad
The Vancouver Canucks activated two players from their taxi squad to the Abbotsford Canucks on Monday with goaltender Spencer Martin and defenceman Ashton Sautner being sent back down to the AHL. With the Abbotsford Canucks playing four games in five nights, they will need all the help they can get. The Abbotsford Canucks needed to play with five defencemen in each of their last two games and should be back to full health on Thursday.
Jack Rathbone and Jett Woo should be back from injury. It’s not yet confirmed, we are working on setting up a call with head coach Trent Cull to get full confirmation. The last we heard was that Rathbone was very close to returning to action before Christmas and this added time away gave him more time to get back to full health. Rathbone went back home to Massachusetts for Christmas and was able to have a couple of dinners with his childhood friend and fellow Canucks prospect, Aidan McDonough.
Advertisement
Ad
Advertisement
Ad
We will try to talk to Cull mid-week to have an update on the injury status of Rathbone, Woo and others who are dealing with injury/illness.
Extra game notes:
-Expect to see a lot of Spencer Martin in the crease as he was recalled from the taxi squad. Martin has started six of the last nine games for Abbotsford. He has a 1.98 goals-against average and a 0.930% save percentage — both stats leading the team.
-Danila Klimovich was just beginning to heat up. The 18-year-old Belarusian sniper has four points in his last five games. He will legally be able to buy a drink in Abbotsford on Sunday when he celebrates his 19th birthday. Klimovich is eighth in team scoring with eight points in 19 games.

Danila Klimovich scores his 3rd goal of the season for the #AbbyCanucks!

-Sheldon Dries is no longer the AHL leader in goals. Three players have passed Dries since the team has been on break.
Advertisement
Ad
Advertisement
Ad
We are hoping to have a conversation with Trent Cull on Wednesday to get more updates on the team ahead of their return to action. For now, look forward to four home games in five nights for the Abbotsford Canucks. If you have the itch for hockey and feel comfortable heading into a 50% capacity arena, the Abbotsford Centre will be around all weekend for your entertainment.