With a week to go before the NHL trade deadline, Jim Benning took stock of a Vancouver Canucks team that currently sits third in the Pacific Division. Amidst the volatility of the battle for the Pacific crown, Benning saw an opportunity to improve his team and pounced. Just a single point back of the division-leading Edmonton Oilers, the Canucks are not only in the race to make the playoffs for the first time since 2014-15, but have a legitimate shot to finish in first place thanks to a sensational young core and a Vezina-calibre season from Jacob Markstrom.

The Canucks acquired a shoot-first, high-possession winger in Tyler Toffoli on Monday night. Whether the market price will be worth it in the coming years is a worthwhile discussion to have, but there’s no question that they’ve improved their forward core in the short term.

The 27-year-old right-shot winger has been among the league’s highest-volume shooters as well as a leader in shot-share since he became a full-time player in 2013-14.

Few have been able to impact the shot clock in their team’s favour like Toffoli has over the years. Toffoli ranks in the 99th percentile of NHLers for 5-on-5 shots per 60 from 2016-2019 according to data tracked by Corey Snazjder. 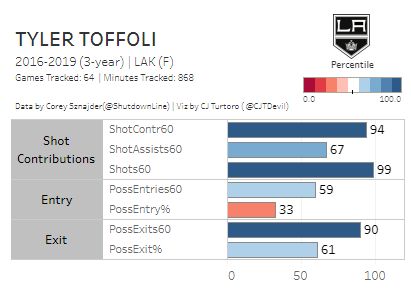 (You can support Corey’s work on Patreon here)

His 2019-20 season has been no different, as he sits 10th overall in the league in shots per 60, while being on track to break the 20 goal plateau for the fourth time in his career. His shot and goal share metrics have also seen a rebound this year, as he is posting elite numbers on a bottom-feeding team. When we take into account the quality of his teammates, opponents, score effects, and other contextual factors, Toffoli boasts elite numbers this season using Evolving Hockey’s RAPM metrics. His RAPM CF/60 is 8.33 which is second in the entire NHL this season and his 0.302 RAPM xGF sits 19th. 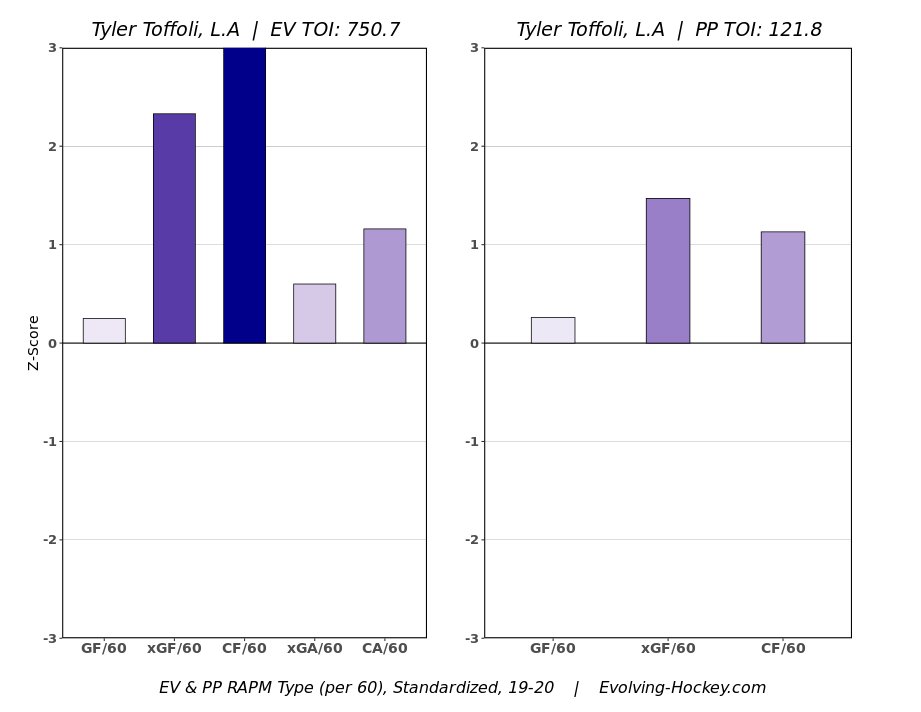 At the foundation of the high-volume shooter is a responsible 200-foot game. Vancouver’s defensive efforts from their forwards have been discussed at length this season by Harman Dayal of The Athletic and Toffoli is the type of player that can positively contribute to those endeavors.

In the clip below, Washington is attempting to break into the Kings zone. The execution isn’t there and the Kings regain control of the puck but the important piece of information pertaining to Toffoli is how he reacts to the break-in attempt. If the puck were to make its way to the F1 of Washington, there is a potential of a 2-on-1 with F2 (Lars Eller #20).

Positioned in front of the play, Toffoli recognizes the threat and points with his stick towards F2 signaling that he has him marked.

Communication is often overlooked when it comes to playing defence, but it’s one of the most important skills in a forward’s toolkit. Defensive breakdowns often happen due to the failure to pick up the correct player, leaving another player exposed. There are so many moving parts in hockey that even if everyone is on the same page beforehand, adjustments need to be made at the turn of a skate blade and communication becomes crucial. In this clip, Toffoli effectively communicates with his teammates the correct threat and even though the threat never comes to fruition, the Kings have done the proper preparation. Toffoli follows it up with a fantastic stretch pass to  Jeff Carter for a primary assist.

This time in the offensive zone, Toffoli responsibly covers the point for a pinching Matt Roy. This was a big area where Canucks forwards failed to execute in Dayal’s piece.

Before we get into Toffoli’s goal-scoring ability, it should be noted that he is also an effective distributor of the puck. When combined with his strength in the corners, this makes him quite effective at drawing defenders towards him and finding the open man. Below are two near-identical plays from Toffoli coming out of the left-wing corner. He curls out of the corner on his forehand, both times drawing in a defender. In the second clip, he even draws in two defenders and accepts a hit. Although under pressure, Toffoli remains patient and continues to work his way out of the corner until a passing lane opens up and he finds a wide-open teammate to set up two goals.

While his responsible defensive play and playmaking are strengths for Toffoli, his biggest asset is his ability to put the puck in the net. Toffoli has a deceptively quick release that he can unleash off the rush or directly after a faceoff. He has the skill to make a drag move to attack the middle of the ice for a better shooting lane or he can beat the goaltender from the wings.

Or, if paired with a strong centreman and the faceoff is at the left circle, Toffoli can quickly get shots off through traffic in a Brock Boeser like fashion.

Toffoli also has the ability to “get lost” in the offensive zone that all good NHL goal scorers possess. In the first clip below, Toffoli retrieves the puck in the corner and dishes off to Anze Kopitar. He begins to position himself away from the play behind the net as the puck gets worked up to the point. He times his pathing to the net-front just at the right time, taking away the goaltender’s eyes just as the puck is shot from the point. The puck never makes it through but the Kings maintain possession and Toffoli proceeds to “get lost.” He floats at the top of the circles away from defenders and sneakily drifts down towards the backdoor, unchecked. The shot makes its way on goal and Toffoli is all alone to pot the rebound. I don’t know how a single Colorado defender didn’t pick him up, which once again to the importance of communication, but is also a great example at Toffoli’s ability to find soft pockets of ice.

In this next clip, it’s easy to imagine Toffoli playing give-and-go with someone like JT Miller or Elias Pettersson off the rush should they get the opportunity play together. Bo Horvat has these capabilities too and I would even say Jake Virtanen has shown an improvement in this regard. Here, Toffoli leaves the puck for the F3 at the top of the circle and cuts towards an open lane on the opposite wing. With stick planted on the ice, he receives the give-and-go pass and has an empty net to shoot at.

Where Toffoli’s greatest strength lies is in his ability to corral pucks in tight and generate rebounds. Toffoli has extremely soft hands and feet that can control bouncing pucks and when combined with his patience to outwait goaltenders, creates a lethal scorer around the crease. Below is a supercut of Toffoli feasting on loose pucks in front of the net and take notice of his deft touch and control.

His soft hands also extend to his ability to accept difficult passes. This play really impressed me as he accepted a hot pass on his backhand and it sticks to his stick without a bobble. He then is able to dangle his way into the inner slot for a great chance and a teammate is able to deposit the rebound.

Toffoli’s knack for getting to the front of the net and finding loose pucks in the inner slot will be of major value to Vancouver, especially on the power-play. He has proven that this skill is repeatable from the eye-test as well as from an analytic point-of-view. Here are all of his goals this season mapped out. The enlarged shapes represent his goals and as we can see, all of his goals this season have come from either the crease or inner slot. Toffoli can get to the most dangerous area of the ice consistently and he has the skills to make the most of his opportunities.

Tyler Toffoli can play on either line in Vancouver’s top-six and thrive because of his responsible two-way play, strong vision, and elite finishing abilities in tight with his soft hands. The Vancouver Canucks traded for one of the top players on this year’s trade market and should see positive results in the immediate future. Whether Canucks fans can accept it or not, Benning has firmly planted his flag in the ground, announcing to the hockey world that Vancouver’s window is now open.