Antione Roussel has only been in the lineup for three games, but he’s already had a major impact. It was fitting that his season debut would be on a night which saw the team and city honour a friend and mentor in Alex Burrows. His inspired play against the Senators in that first game back was clearly infectious to the team and the new-look third line.

In his first two games back, that line made an immediate impact as it was on the ice for four goals, three of which came off the stick of Roussel.

Prior to his return, many expected him to line up alongside Bo Horvat as a way to spark the team’s captain, who has been underperforming on the scoresheet. Anyone who was exposed to the chemistry the two showed from last season has been left hanging, as Roussel was placed on the third line with Adam Gaudette and Jake Virtanen instead.

Since it was Roussel’s first game back, it was easy to theorize that Travis Green was looking to shelter his minutes a bit and not throw a player who hasn’t played at NHL pace all year back into the top-six. Now, however, it appears that that theory doesn’t hold water, as Horvat’s line has gone back to its scoring ways and Roussel appears to be clicking well with Gaudette and Virtanen.

There are still question marks about where pieces in this lineup will land as the forward group looks to be healthier than they have been all season, but Travis Green may have a good reason to feel inclined to keep the trio together for a while longer.

Coaches will always appreciate the ability to ice at least three lines that can score, and in a somewhat surprising occurrence, Roussel’s brief demonstration of chemistry with Virtanen and Gaudette could allow the Canucks to have a third line that can score consistently. Prior to their look on the third line, we saw a third line driven by Sutter that hit the scoresheet early on, but cooled off before his groin strain. The major concern with that line was obviously sustainability, as their production was propped up by an unusually high shooting percentage.

The need for more consistent play from the middle of the lineup could feasibly be filled by this new, exciting trio that spent all of six minutes together in the 2018-19 campaign. There’s reason to believe the line may be more than just a flash in the pan, given that the Roussel-Virtanen combo yielded positive results that season in the 201 minutes they played together. 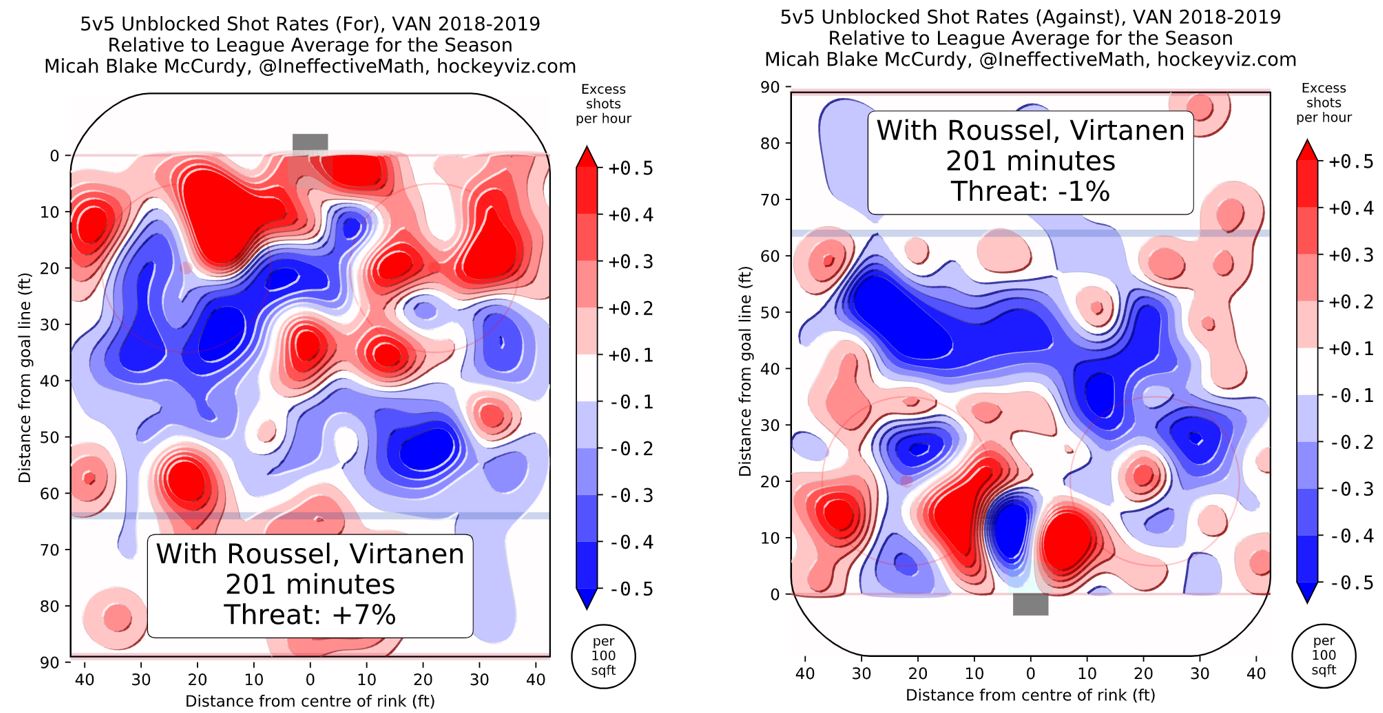 We can see that they generated 7% more 5 on 5 unblocked shots than average and gave up 1% less on the defensive end.

Using Micah’s same environment distiller maps, it’s clear that the three have had an overwhelmingly positive impact in their brief time together, especially on the offensive end. It should be noted that due to the recency of the last game against the Leafs, that data was not yet available to be captured in the maps below.

They have been dominant at evens on the offensive end, registering 70% more unblocked shots at 5 on 5 than average. Not only are they registering a healthy share, but they’re doing so from within close range. Defensively, they have done well together as well, which may come as a bit of a surprise considering Gaudette and Virtanen’s struggles in their own end this season.

Gaudette’s elevated play this season also adds to the intrigue surrounding the line. He’s becoming more confident with the puck and as a result, he’s holding onto the puck longer to create better plays for himself and his linemates. As mentioned, there is room for defensive improvement from the Northeastern product who owns a sub .500 Corsi share because of his defensive shortcomings. This isn’t uncommon for younger players who most often sharpen the defensive details of their game after the offense comes.

While the line seems like it should be capable of seeing favourable results for the rest of the year, it’s important to consider a few factors. The first is that they’ve benefited from playing against lower quality of competition, in the form of Ottawa and Buffalo. Secondly, it’s a very small sample size that should really only have us wanting to see more rather than declaring them the answer to the team’s third-line scoring woes. The last consideration is Brandon Sutter’s health. He appears to be close enough to return any game now and it’s no secret that he’s been Green’s go-to to center the third line, so it will be interesting if his presence is enough for Green to break up the good things we’ve seen from the Roussel-Gaudette-Virtanen line.

With that card in play and the Canucks getting healthier, it will be interesting to see how Green handles a line that’s played with such great pace and energy since the injection of Roussel. Having a third line that can consistently out-chance its opponents is an advantage that helps separate playoff teams from regular season pretenders and barring a Sutter substitution or a defensive drop off, the trio of Roussel, Gaudette, and Virtanen could give the Canucks that advantage.