The modern NHL power play has gradually shifted away from the traditional two defencemen set up, transitioning towards the four-forward formation that is most common today. Dailyfaceoff.com displays two power play units for each of the 31 NHL teams. Of those 62 units, just 20 are formed with two defencemen. Only two of the league’s first unit power plays run two defencemen: the Minnesota Wild and New York Islanders. Technically, there is a third, the St. Louis Blues, but it could be argued that they have a 1a and 1b powerplay set up as the Vladimir Tarasenko led four forward unit is listed as number two. It is evident that NHL teams believe their best chance for success on the powerplay includes stacking four forwards with the exception of the Minnesota Wild, who are the only team to use two defencemen on both units.

The Vancouver Canucks deployed one of the twenty aforementioned power play units that utilized two defencemen on opening night, sending out a second unit that feature both Quinn Hughes and Tyler Myers. Some fans were disappointed that Hughes wasn’t getting the chance to line up on the first unit with Brock Boeser and Elias Pettersson, but it’s only a matter of time before the coaching staff puts their best three power play options together.  Until then, Vancouver has the ability to roll out a second unit led by the offensively-minded pairing of Myers and Hughes that still has the potential to be a success in its own right.

Let’s take a look at both players.

Evolving-hockey.com’s RAPM (Regularized Adjusted Plus Minus) model is one of the best public models at measuring a player’s isolated impact on driving play. It accounts for quality of team and competition, game state, zone starts, as well as other factors. 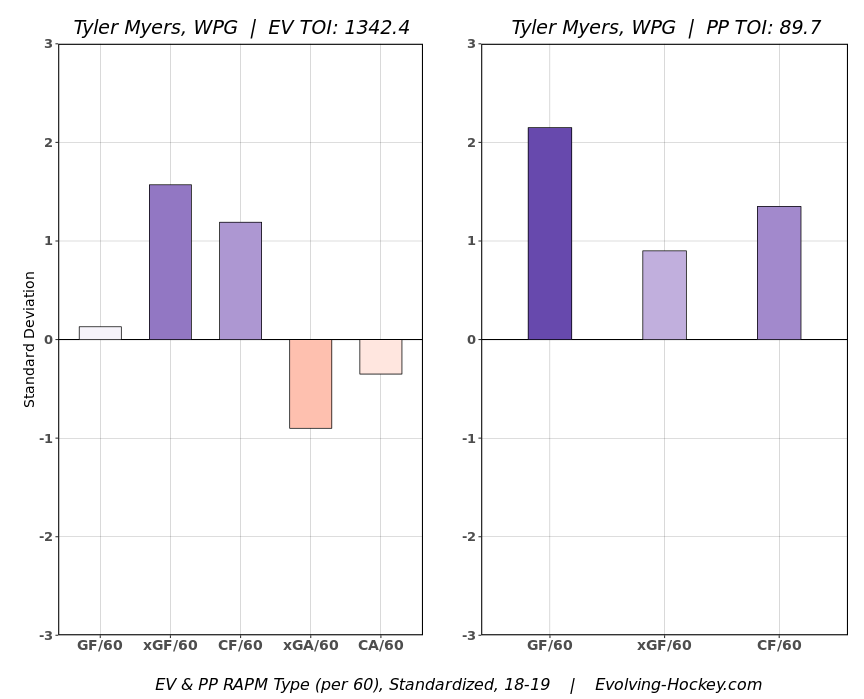 When we look at Tyler Myer’s RAPM chart for the power play last year as a Winnipeg Jet, we can see that he fared quite well in adjusted goals for per 60, adjusted expected goals for per 60, and adjusted corsi for per 60. This came from just under 90 minutes of power play time on the Jets’ second unit which also happened to feature a two-defencemen set up. That season, he ranked 31st among defencemen in adjusted corsi for per 60 and 37th in adjusted expected goals per 60. From a numbers perspective, this indicates Tyler Myers was a top-40 power play defenceman last year, or in other words, a high-end second unit defenceman.

The 6’7” Myers offers many valuable traits to Vancouver’s man advantage. In a recent article published in The Athletic, Canucks power play coach Newell Brown praised Myers’ ability to make plays like a forward: “taking the puck downhill and shooting it, reading the pressure and moving it to the right guy… on entries, he’s got good speed.”

Myers’ ability to attack with speed from high to low is enabled by his mobility. While this goal came at 5 on 5 and not the power play, it still highlights how Myers can take the puck “downhill.” Not many defenders can score a wrap around goal like this one.

When Brown talks about reading pressure and moving the puck to the right guy, this fake slap shot turned slap pass is a great example. Myers’ offensive awareness is on full display here.

Zone entries are crucial for a successful power play and Myers and his speed will add another element to Vancouver’s bag of tricks.

Last year, Winnipeg made frequent use of this dump-in play that effectively uses Myers’ speed. Once the puck is dumped in, Myers (far side) hits the gas and challenges the defender along the boards to take control of possession. Notice how deep Myers goes and that there are four Jets below the hash marks in order to retain possession.

Myers is also well equipped to man the top of the power play.

Here he shows impressively quick feet for a big man to keep the play alive.

Lastly, he has a slap shot that can beat goaltenders clean; an element the Canucks have lacked aside from Alex Edler. However, only two of his goals came from above the circles and he only scored one goal with his slap shot so I hesitate to label it a game-changing weapon.

The 5’10” Hughes blends his elite skating ability and vision to create offence on the power play akin to his towering counterpart.

The rookie’s skating ability and how it will allow the Canucks to gain the zone with control on the man advantage has been a frequent talking point since he made his debut last season. He can slither through all three zones, poised and confident with the puck, acting as a one man break in machine.

Quinn truly is of the Zoomer generation. The skating displayed in this end to end entry is elite and he makes it look effortless. With a forechecker barreling down on him with a favourable angle, Hughes casually shrugs him off and takes off.

Following a broken play and an oncoming forechecker, Hughes, after receiving the puck, immediately fires a cross-ice pass to start the counter-attack.

He can receive the neutral zone drop pass from a teammate and use his built up speed to attack the blue line.

Simply put, Quinn Hughes changes how penalty killing units will defend against Vancouver’s power play entries when he is on the ice. His ability to transport the puck in a variety of ways makes it extremely difficult for defenders to eliminate all of his options.

Once he has established zone possession, Hughes can burn penalty killers with the many weapons in his arsenal. Most notable is his ability to create space for himself and teammates. Hughes is able to open shooting and passing lanes because of his skating proficiency.

He likes to use a fadeaway shot when he is taking a wrist shot from the point. He is able to change the lane and get his shot past the defender using this skill and is still able to maximize power from his edges and open hip rotation.

His edges allow him to escape tight pressure and come away with time and space to make a play.

A strong playmaker with fantastic vision, he can also thread the needle to set his teammates up for one-timers.

These elements add up to make Hughes an extremely lethal puck distributor on the power play while his ability to get pucks through shooting lanes will force defenders to play him honestly.

The Set Break In

On their own, Quinn Hughes and Tyler Myers have the potential to be strong defenders on the man advantage, but when working in tandem, the two could be something special.

As previously mentioned, establishing possession through zone entries is paramount for a lethal power play. The Canucks, with Hughes and Myers on the ice, could design a set play that would utilize both players’ strengths.

Here Quinn is carrying the puck up ice and #33 in black. In this example Joseph Cecconi, is in Tyler Myers’ spot. The University of Michigan are attacking four players wide and are coming up the ice at the same time. Hughes is able to easily get around the neutral zone penalty killer and because of the numbers, the three remaining Notre Dame defenders have no choice but to let Hughes gain the zone. In this clip, Hughes takes the shot himself but an alternative and possibly more effective play could have been moving the puck to the right side.

In this clip, the Winnipeg Jets break in the exact same way – four players wide. Nikolaj Ehlers is acting as Quinn Hughes and Tyler Myers is streaking down the right side. Ehlers dishes off to Myers and Myers uses his shot to create a rebound for Matthew Perreault.

The pairing of Hughes and Myers could also create more opportunities for Myers to have an open shooting lane due to Hughes’ movement on the power play.

This is a simple yet effective set play that would free up Myers’ shot. Hughes starts with the puck along the left half wall and #33, again a stand in for Myers, is at the top. Hughes skates the puck up to the top and switches positions with ‘Myers.’ Hughes then moves the puck to the right wing and ‘Myers’ slips down towards the bottom of the left circle, in behind the penalty killers. The right side forward whom, in the Canucks’ case would be Bo Horvat, then threads a pass over to ‘Myers’ who is wide open with a chance to use his heavy shot.

Quinn Hughes’ ability to not only make the cross ice pass but to also create the lane to do so will benefit Myers to find himself with time and space to shoot.

The duo can also play catch to get the diamond moving and open lanes. 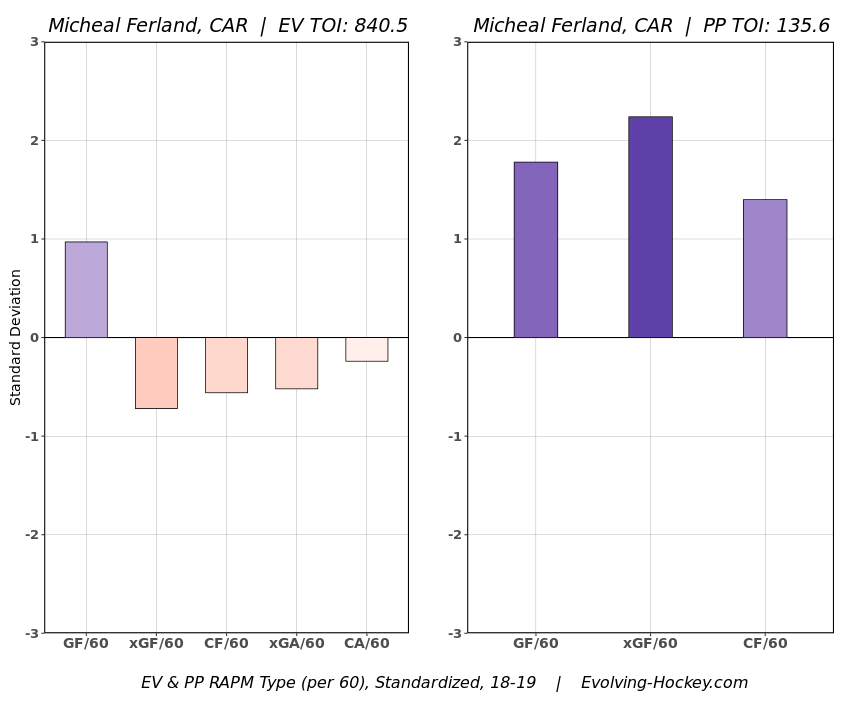 While the unit headlined by Elias Pettersson and Brock Boeser is rightfully Vancouver’s top powerplay unit, the second unit with Hughes and Myers could turn out to be lethal in it’s own right. In the duo, the Canucks have two players that can effectively establish zone possession through zone entries, create shooting and passing lanes through deception and agility, attack below the circles, and get shots on net. Add an extremely strong power play forward in Micheal Ferland as well as Bo Horvat and the Canucks could be looking at a very good second unit in the time that passes before Hughes inevitably earns a spot on PP1.