One of the biggest questions going into the Vancouver’s offseason was how Jim Benning would address the blue line. Having stayed relatively static for the past 2 seasons, it was clear that something would need to change if the team that allowed the 10th most goals over that time had any hopes of taking the next step.

There are a lot of ingredients that go into keeping the puck out of the net, but the personnel on defence is an appropriate place to start, so I was cautiously optimistic about what moves they would make. Would they be moves that could benefit them in the present and the future? Or would they be like the final season of Game of Thrones – rushed and disappointing?

This article’s purpose is not to debate the long term effects of signing Tyler Myers – it is clear that the Canucks are a better team today than they were last September with their updated defence core.

Today I’ll be looking at some numbers and video to paint a picture of how the Canucks surrendered goals last year and if their offseason additions will allow them to mitigate some of the offensive chances that they gave up.

How the Canucks Allowed Goals 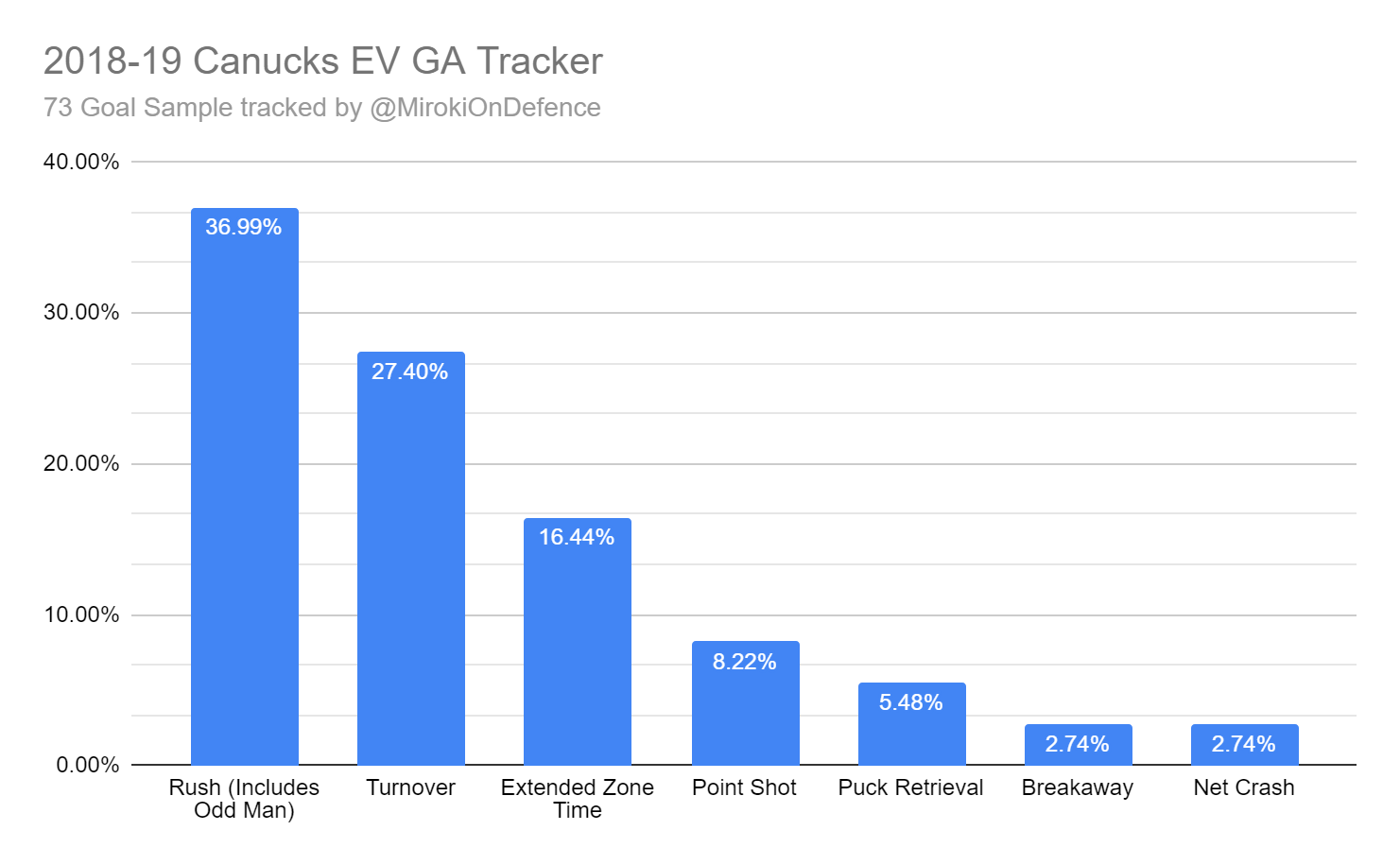 The Vancouver Canucks surrendered 73 even strength goals over this period, with goals off the rush leading the way by a wide margin. Harman Dayal of The Athletic had a great piece last season where he found a strong correlation for passes off the rush as being an indicator for future 5v5 points/60. Notably, passes off the rush were a stronger indicator for future production than past 5v5 points/60. This serves as an interesting insight on how offence is created in the NHL today. When we apply this line of thinking to the Canucks defence, 36.99% of goals against came from the rush, prompting the question: how do you cut down on rush chances against? This is tricky to answer as rushes can develop out of a myriad of possibilities such as a giveaway at the opposing blue line or a great counterattack by the opposing team. Odd-man rushes add another layer of difficulty in defending the rush, as it is best practice to sit back, give up the blue line, and play the pass by staying in the middle rather than challenging the first forward in.

A large aspect to defending against a rush is actually dictated by the forwards and what they are doing in the neutral zone. If they are able to slow down attackers by applying pressure and taking away space effectively, stopping the rush becomes much simpler. An example of a forward ineffectively pressuring an attacker is shown here with Nikolay Goldobin:

Goldobin is applying pressure from the middle of the ice and it looks like he is going to force Jakub Vrana towards the left wing boards. Alex Biega, rightfully, begins to angle himself towards those boards to work in tandem with Goldobin. However, Goldobin takes his foot off the gas and allows Vrana the middle lane. Suddenly, Biega is out of position and Vrana has ample room to work with entering the zone. Had Goldobin continued on his route and forced Vrana towards the boards, this rush could have been considerably less dangerous (WSH would go on to score soon after).

Another key element to strong defence of the blue line is practicing good gap control. Gap control can, at first, seem counter-intuitive. If an attacker is coming at you with speed, your instincts are most likely be to back off allowing more room to work with in order to not let the attacker past. However, this extra room is beneficial to the attacker as with more space, they can build up speed and have more freedom and control with the puck to attack, which allows them to dictate the play. By applying pressure, defenders can effectively take back control by dictating the time and space of their opponent. Combine gap control with an active stick and you can eliminate passing options as well as create opportunities for a pokecheck.

Here, Ben Hutton plays too far back on this zone entry by Devon Toews. He’s more than 2 stick lengths away which gives Toews an abundance of time and space to work with, and the Islanders eventually end up scoring on the play.

Corey Sznajder tracked 15 Canucks games last season and found that Canucks defencemen broke up 8.65% of plays at their own blueline. For reference, the average breakup% in the league was 8.83. While there is a lot more to the story of blue line defence, the fact that the Canucks hovered around league average in this category is a positive sign considering the players that were at their disposal. Still, this is definitely an area that they can look to improve upon.

The second aspect that I would like to inspect is defensive zone turnovers. Over a quarter of Vancouver’s goals against came off turnovers, many of which were caused by a failed attempt to exit the defensive zone. Breaking the puck out of the defensive end is key, not only to playing strong defence but also to starting an effective counter-attack. In this regard, the Canucks simply did not execute well enough last season. Vancouver’s defence struggled to break the puck out of their zone with control via breakout pass or skating the puck out. They had a measly success rate of 27.62% with the league average at 31.03%. This is the area that I hope to see the Canucks defence core improve upon this season with their new acquisitions.

The Canucks went into last season with a blueline that looked something  like this:

After the team’s offseason moves, we are looking at something like this*:

As others have noted, addition by subtraction will be a major element to the Canucks’ improvement in the upcoming season. Looking at the table below, Erik Gudbranson was abysmal in both breakup and controlled exit percentage and Derrick Pouliot was ineffective moving the puck out of his zone with control. Michael Del Zotto was effective in both areas and Ben Hutton was not playing in the 15 tracked games.

Vancouver’s newcomers do not push the needle in terms of breakup percentage but could offer the Canucks a significant improvement in the controlled exit department. Tyler Myers, with his considerable agility and puck moving prowess, successfully exited the zone with control 42.67% of the time. Jordie Benn was also strong in this regard with 36.56%. Both Myers and Benn are large upgrades over predecessors Gudbranson and Del Zotto when it comes to controlled exits, which should cut down on defensive zone turnovers and lead to more counter-attacks.

How pumped are #Canucks fans about Quinn Hughes! Will make such a difference for Van's transition game. Since joining the team, he has more than double the amount of zone exits than any other Canucks D…

We also can’t understate how valuable rookie Quinn Hughes will be in this facet of the game either as his combination of elusiveness, smarts, and puck distributing ability will allow him to break the puck out with control at a high level even in his first year.

This is a giveaway from last season by Derrick Pouliot. The Canucks have a numbers advantage in their own end, which makes Pouliot’s turnover close to inexcusable. No Canuck was on the left wing to receive a pass, but Pouliot should recognize with a shoulder check that three Canucks were on the right side of the ice. A simple bump off the end boards to Antoine Roussel as Patrick Marleau gets stuck in would have alleviated the pressure and given the Canucks a chance to break the puck out.

This is one area where Quinn Hughes should improve the breakout. Here, Hughes executes the play Pouliot failed to make in the earlier clip. With the Dallas forechecker oncoming, he knows he has Luke Schenn for support and bumps it off the end boards. It’s very subtle, but it serves as a great example of how he can help the Canucks create more time and space in the defensive zone. The issue here is that the Canucks are just finishing a line change and the wingers are not in their spots, so unfortunately it still results in a turnover. Schenn gets put in a tough situation even with the bit of space Hughes has created for him and doesn’t have many options. I’ve thought about this play a lot and I still think this is a good play by Hughes. These are the kind of plays you want to allow to grow in his game even if it didn’t ultimately work in this instance.

With all of the new faces and possibilities headed into the season, it is a very exciting time to be a Canucks fan. Vancouver’s defence has undergone a measurable improvement with their ability to move the puck out of the defensive end, which should affect both their defensive and offensive numbers.

Obviously, this is just one lens through which we can evaluate the new-look defence and there are other aspects of the game that can and should be inspected as well. However, from this standpoint, the new additions look to be an improvement over last year’s defence. Fans hoping to see their favourite team take the next step into playoff contention will be closely monitoring how this group fares with tight gaps and controlled breakouts.