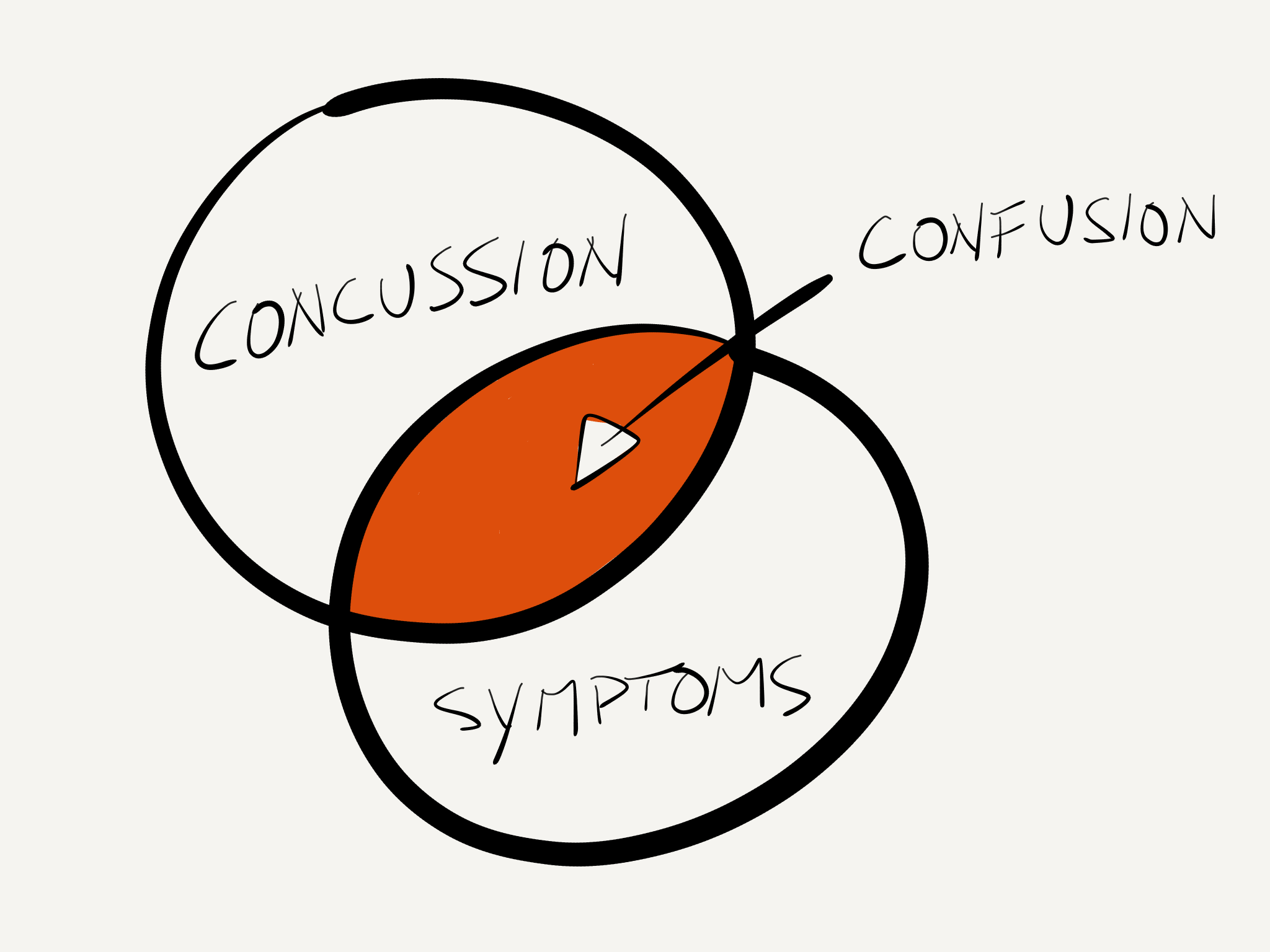 By Graphic Comments
6 years ago
If a player gets a concussion but there’s no doctor there to diagnose it, did he have any symptoms?
According to Gary Bettman, the answer is no.
At least that’s the only conclusion you can come to after reading his decision to uphold Dennis Wideman’s 20-game suspension for knocking over linesman Don Henderson.
And what a fascinating read it is.
This was a Bettman work of art, dripping with sarcasm and outrightly derisive at times. You can’t come away from reading it without picturing Bettman rolling his eyes at the testimony from Wideman or the NHLPA’s medical experts. And you certainly don’t need to read between the lines to imagine Bettman’s snickering sneer as he wrote some of the most pointed barbs in the decision.
Advertisement
Ad
Advertisement
Ad
Just picture one of those Bettman press conferences from the lockout and you’ll know exactly the tone that he took in writing up this decision.
I’m not here to discuss the merits of Bettman’s decision to uphold the suspension. As per Article 18.12 in the CBA, the appeal to the Commissioner is only in order to determine whether the original “decision was supported by clear and convincing evidence.” That’s a pretty low standard to clear, and it’s really no surprise that Bettman sided with his own staff on this.
No, what really interested me as I read the decision is how often Bettman went seemingly out of his way to attack and ridicule Wideman’s concussion defense. Ever the evil mastermind keen legal mind, Bettman clearly saw more at stake here than just the 20 game suspension.
Advertisement
Ad
Advertisement
Ad
He realized this case has the opportunity to open up another front in the league’s ongoing concussion-related legal battles and it needed to be contained. Or at least, the league needed to maintain logical consistency in their arguments and not provide evidence that could be used against them in the lawsuits, which are the real threat to the NHL in so much as they could cost them money. And we should all certainly understand by now that money is the really the only guiding principle behind every decision Bettman and the NHL makes.
With that in mind, let’s examine just how Bettman methodically takes apart effect that concussions can have on an individual. And that last bit is important. Because while Bettman is careful never to question the generic symptoms of concussions in the abstract, he very clearly questions their veracity at the individual level:
Advertisement
Ad
Advertisement
Ad

In effect, Bettman is ok with admitting that concussions might cause some symptoms sometimes for some people. But try to get specific and he’ll insinuate you’re a liar.
You see, because even though impulse control might be a common concussion symptom, unless you can definitively and objectively conclude that a specific individual was experiencing impulse control problems, well then it just didn’t happen: 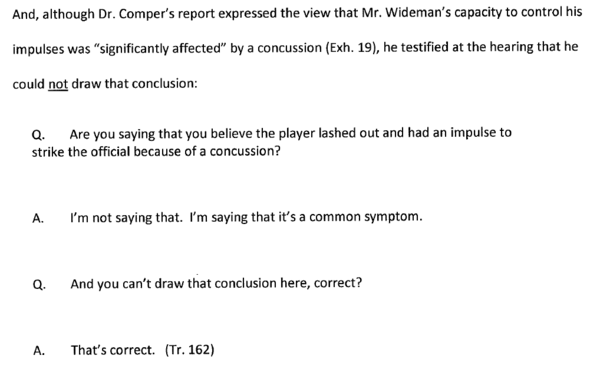 This kind of makes me wonder just what that medical test for loss of impulse control might be. Like, should there have been a doctor on the bench with a cupcake? Or maybe he could be there holding Wideman’s cell phone with a blinking “new message” light. Or…oh oh I know, maybe put a linesman in his way as he’s skating back to the bench!
Advertisement
Ad
Advertisement
Ad
Because you know what sounds like an impulse control problem to me? Somebody with an unblemished record of supplementary discipline, violently checking a linesman to the ice for no apparent reason. I’m sure over the 755 games in Wideman’s NHL career he has on numerous occasions resisted the temptation, urge or impulse to cause harm onto another player. Yet this time, he didn’t. Hmm. I wonder why…

But hey, I am not a doctor.
Not that it would matter to Bettman.
I mean, the level of dickishness in the cross-examination of the two expert witnesses was incredible. At one point, one of them said that “you have to believe what your patient is telling you” that led to this jaw-dropping sequence:
Advertisement
Ad
Advertisement
Ad

Q.  So when you said in your direct examination in response to Mr. Stoykewych’s question about whether you believe the things Mr. Wideman told you, you said you have to believe what your patient is telling you?
A.  Correct.
Q.  Mr. Wideman wasn’t your patient?
A.  That’s correct.
Q.  So you didn’t have to believe what he told you, correct?
A.  Yeah.
Q.  But you did?
A.  Yes.
Q  And…you didn’t do anything to kind of test out whether what he was telling you might not be the case, did you?
A.  That’s correct.
Q.  You simply accepted it at face value?
A.  Yes.

Advertisement
Ad
Advertisement
Ad
The NHL’s representative (it’s unclear whether it was Bettman or the NHL’s lawyer doing the questioning here) then proceeded to scold the doctor for not including in his report the “possibility” that Wideman was exaggerating his symptoms in order to avoid responsibility for his actions. So, while Bettman takes issue with qualified assessments when it comes to the symptoms, apparently he doesn’t have issue with qualified statements when it comes to Wideman’s motivation.
Then there’s the consistent use of “scare quotes” when talking about Wideman’s state of confusion. Those scare quotes are apparently necessary because Wideman’s claims of confusion, and the doctors’ experience of confusion as a common symptom are contrary to the objective evidence provided by, wait for it, the video of the incident! That’s right. Gary Bettman needs to be able to see the effects of a cognitive impairment.
Advertisement
Ad
Advertisement
Ad
So if you were to turn to the Brain Injury Association of America for a look at the “common issues people experience after a concussion” you would find that pretty much all of the symptoms that could have lead Wideman to hit Henderson would have little or no visible manifestation:

Interestingly enough, while Bettman finds that the video provides “objective” evidence, he gleefully points out that Dr. Comper’s “testimony is illuminating as to the subjectivity of his (and Dr. Kutcher’s) own conclusions” drawn from the video.
So when Bettman watches the video, it’s objective. When a doctor watches the video, it’s subjective. See the difference?
Finally, to wrap it all up in a nice little bough, and get to the point Bettman really wanted to get across, he basically spelled out the NHL’s guiding principle when it comes to concussions:
Advertisement
Ad
Advertisement
Ad

So you doctors can talk all you want about generic symptoms and long terms effects of concussions, but everybody’s experience is different, so you’re going to have to prove it. And none of this preponderance of evidence standard of proof either. You’re going to have to prove it beyond a reasonable doubt.
Bettman then concludes his written decision with a systematic takedown of Wideman’s defense and pretty much questions his integrity on every point. Even if he were to concede that Wideman was in some sort of distress, Bettmand contents that “his every instinct as an NHL player should have been to avoid hitting Mr. Henderson”. Because, you know, from an early age, NHL players are taught to avoid physical contact at every opportunity.
Advertisement
Ad
Advertisement
Ad
Then in stunning show of gall, Bettman says that he has to uphold the suspension because “on-ice officials simply can’t be made the target of a player’s frustration or anger.”
So while he has spent the entirety of the written decision undermining conjecture and supposition on the part of the expert witnesses as to Dennis Wideman’s state of mind during the incident, he then proceeds to assert that he alone knows Wideman’s emotional state and motivation.
Bravo, Gary! Bra-vo!
And for an encore, he needlessly trots a text message from Wideman to a teammate blaming the whole thing on “the stupid refs and stupid media” just to further impugn Wideman’s character and at the same time show how magnanimous he is in not increasing the suspension, as was within his discretion.
Advertisement
Ad
Advertisement
Ad
Irony is dead.
After all, nothing has been more of an embarrassment to the NHL than the release of internal emails: 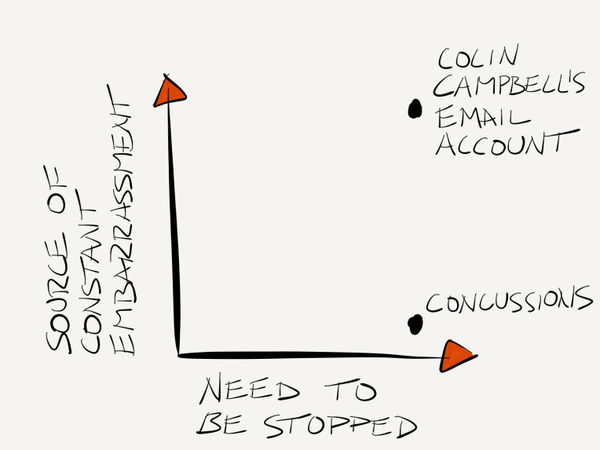 So the NHL using somebody’s electronic communications regarding concussions against them is truly Gary Bettman at his finest.
What this all comes down to is that the NHL, much like the tobacco industry before it, is going to deny any and all negative impacts arising from its product. In fact, I’m pretty sure that the only way Harry Gary will ever acknowledge any kind of symptoms or long term effects of a head injury is if a dog starts chewing on somebody’s massive headwound: 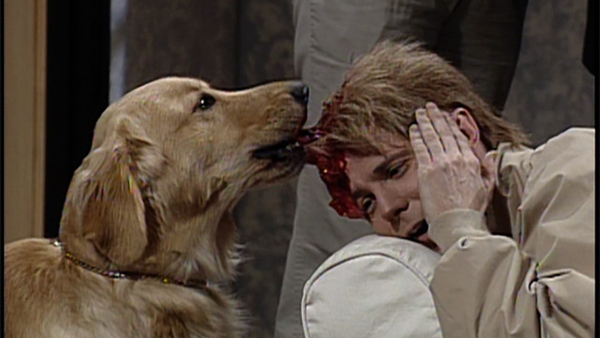 You can also check out the monthly collections of Graphic Comments over at The Sporting News.