Advertisement
Ad
Canucks Army Postgame #37: 800
By Jackson McDonald
5 years ago
Embed from Getty Images
Back-to-back wins against Californian teams sure don’t have the caché that they used to, do they? It could be that the Pacific isn’t as strong as it once was, it could be that LA and Anaheim both looked asleep at the wheel in each of their respective losses in Vancouver, or it could be that the playoffs seem like an absolute pipe dream at this point in the season. At any rate, I can’t remember a time I felt less excited over a big win against an even bigger rival.
At the end of the day, The Canucks were full value in tonight’s win, and technically are just 4 points out of a wildcard spot. So let’s stay positive? I guess?
Advertisement
Ad
Advertisement
Ad
STATS 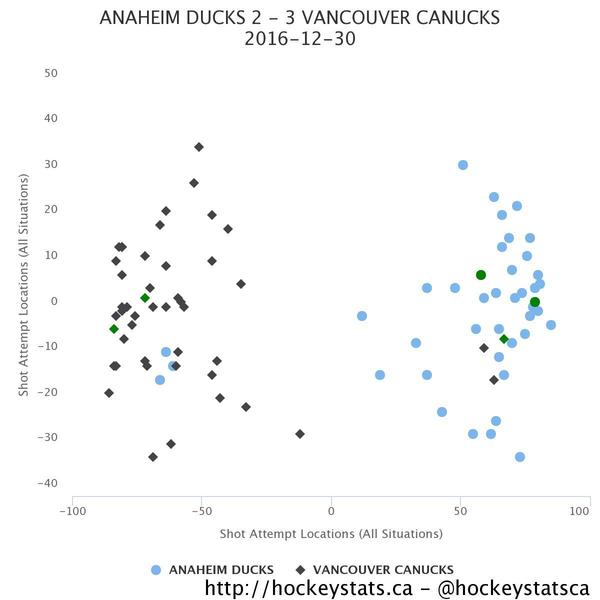 Ryan Getzlaf with the SHG to put the Ducks up 1-0#Canucks pic.twitter.com/1C0lsIeY9E

After a review for goalie interference – Lindholm is credited with the goal – #ducks up 2-0#Canucks pic.twitter.com/9kaRDDfRti

Jack Skille scores to tie the game at 2#Canucks pic.twitter.com/L7Dv58sOxH

Henrik Sedin scores in OT to give the #Canucks the 3-2 OT win pic.twitter.com/9eE79gj9lX

Horvat didn’t get an assist on Skille’s goal.
Horvat should have gotten two. pic.twitter.com/ZsudGoUpG9

ON THE BRIGHT SIDE

ON THE DOWN SIDE