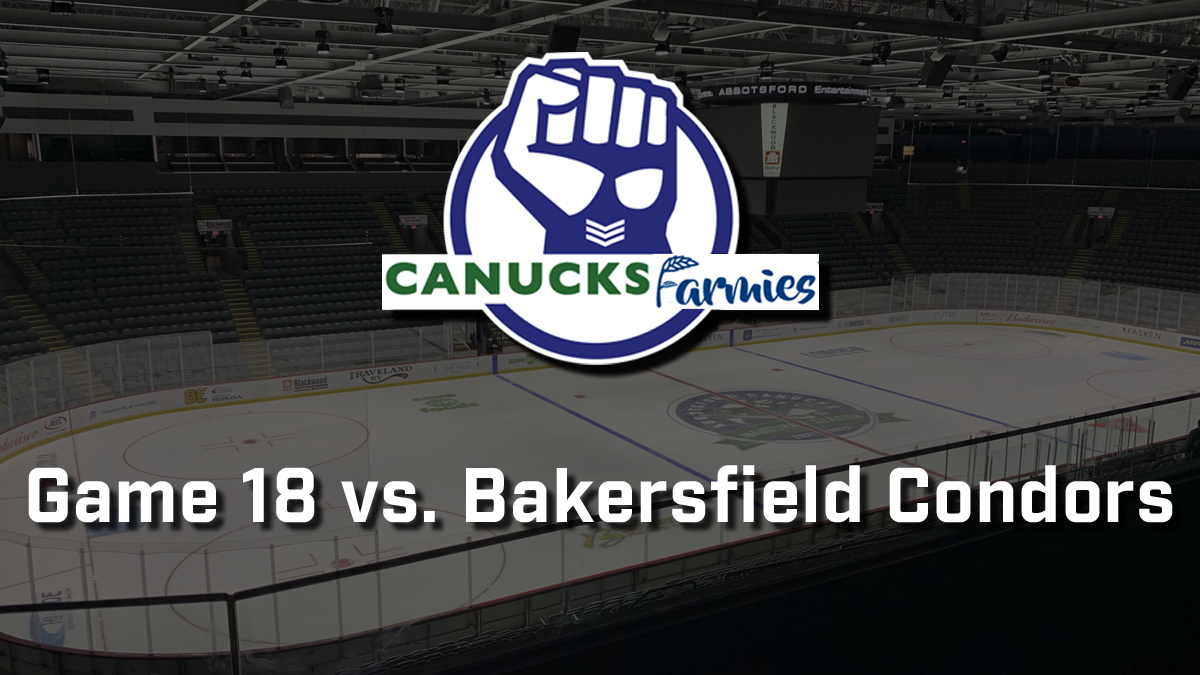 By Cody Severtson
2 months ago
There is truth in the saying, “the apple doesn’t fall far from the tree.”
On a cold and miserably snowy evening in the lower mainland, the Abbotsford Canucks played just like their big brother: dominating the visiting Bakersfield Condors with three straight goals while outshooting them 25 to 11 over two periods.
Then, like Big Brother Vancouver, after taking their foot off the gas for only five minutes, the Farm quickly lost their lead, surrendering three straight goals on four shots.
Fortunately, the similarities to Vancouver did not stop at “can lose multi-goal leads just as fast as they can generate them.” Danila Klimovich, playing the best game of his young AHL career, broke the tie with his second goal of the season, single-handedly getting Abbotsford’s foot back on the gas to secure the victory.
After sixty minutes, the Farm leaned on their inherited ability to build leads, lose them in spectacularly bad fashion, and win outright by simply “outscoring their problems.” It was quintessential AHL hockey, with Abbotsford recording three-straight goals over the final ten minutes to secure two points.
The decisive two points helped the Farm leapfrog the Condors into the seventh and final playoff spot!

On Wednesday night, the Farm ran it back against the Bakersfield Condors, where they separated themselves further from the bottom of the Pacific Division with a 4-3 regulation win!
For the second night in a row, the Canucks’ dominated possession and shot volume but, due to weak goaltending, had to work incredibly hard for their win.
Let’s get into the Farm’s very bizarre but fun game!

The Canucks started the period with a great rush zone entry from Michael Regush. While Regush’s pass did not find a linemate, Vincent Arseneau picked up the Condors’ clearing attempt for a shot on goal.

Unfortunately, Rodrigue immediately swept Arseneau’s shot out into the neutral zone, where Ty Tullio outmuscled Regush for the breakaway goal on the Condors’ first shot of the evening.
Bakersfield Condors Goal: 1-0 Condors
Ty Tullio from Olivier Rodrigue and Philip Kemp

Two things you hate to see:
Regush’s displaying excellent speed and hands to enter the zone for a quality scoring chance setup, only to lose Tullio on the ensuing backcheck.
Collin Delia trying to scoop Tullio’s shot with his glove before opening his five-hole and allowing the game’s first goal on his first shot faced.
Fortunately, like Danila Klimovich on Tuesday, the Farm did not show signs of frustration. In fact, the Canucks poured on the pressure after Tullio’s goal, outshooting the Condors eight to one just five minutes into the game.
Christian Wolanin continued his dominant play of late with a shift inside the offensive zone that left Jett Woo wide open at the left circle for a grade-A scoring chance.

Things you hate to see:
Wolanin single-handedly draws three Bakersfield skaters toward him at the right circle, opening the left wing for Jett Woo to wade toward the goal uncontested. Unfortunately, he completely flubs his one-timer attempt.
Fortunately, the Canucks relentless pressure eventually paid off, with Abbotsford’s fourth line drawing a hooking penalty against Jason Demers to hand the Canucks their first power play of the evening.

The combination of Arshdeep Bains, John Stevens, and Danila Klimovich looked excellent on Tuesday night and even more so during Wednesday’s game. Bains has incorporated many flashy fakes that Klimovich uses to deceive goaltenders before shots. Klimovich has begun to move his feet and skate with the pace that Stevens/Bains play with on every shift.
Their puck movement inside the offensive zone helped open up space for Klimovich to find Stevens with a pass in the slot that drew the game’s first penalty.
PP1: Rau, Pederson, Lockwood, Nielsen, Wolanin
The first power play unit spent all two minutes on the ice inside the offensive zone. While they created numerous good looks, they could only generate a single shot on goal.
On their next shift following the Canucks’ power play, the fourth line continued to give the Condors fits inside their zone, cycling the puck effectively around the perimeter before finding Wolanin for his fourth goal of the season.
Abbotsford Canucks: 1-1 Tie
Christian Wolanin from Arshdeep Bains and Danila Klimovich

Things you really love to see:
Danila Klimovich picks up a blocked pass by Stevens and immediately curls for a picture-perfect shot on Rodrigue. Then, Arshdeep Bains leaps from behind the goal line to catch Klim’s rebound and sends a gorgeous blind backhand pass to a crashing Wolanin at the bottom of the left circle.
Wolanin’s goal extended his point streak to ten-straight games, a new Abbotsford Canucks franchise record.
The Condors started to generate significant pressure in the Canucks’ d-zone late in the period, only to shoot themselves in the foot by taking their second penalty of the period.
For the second time in the night, the Canucks’ first power play unit struggled to thread shots on goal, spending most of their power play time in the neutral zone. The second power play unit came onto the ice with less than 25 seconds left on the man advantage and managed the same number of shots on goal as the first unit: one.
Though the Canucks’ finished the period having outshot the Condors 13 to eight. The Condors rallied through the back half of the first, having outshot Abbotsford six to three in the process.

At the start of the second period, the Abbotsford Canucks looked more like the Canucks’ from Tuesday night. The Canucks dominated the Condors inside their zone throughout the opening five minutes, pouring a barrage of shot attempts toward Olivier Rodrigue.
Despite the eight minutes of sustained control inside the offensive zone, the Canucks managed only three shots on Rodrigue.
It was very “AHL” of them.
Then the goals started to be scored.
With eight minutes left, Kyle Rau drew a hooking penalty against Darien Kielb to hand the Canucks their third straight power play opportunity.
This time, PP1 finally connected for a goal!
Abbotsford Canucks Goal: 2-1 Canucks
Will Lockwood from Christian Wolanin and Kyle Rau

Things we like about this sequence:
Wolanin kicks off the sequence with a toe-drag and angle fake before ripping a shot into the chest of Rau. Rau casually taps the puck out to Will Lockwood, who pulls it top corner to give the Canucks their first lead.
Unfortunately, as they did against the Condors to start the third on Tuesday, the Canucks took their foot off the gas.
Bakersfield Condors Goal: 2-2 Tie
Dino Kambeitz from Luke Esposito and Jason Demers

The two things we don’t like about this sequence: are Brisebois’ half-hearted pressure along the perimeter and Collin Delia allowing a point shot despite having a clear view of the shot.
Then, with less than two minutes to go, Delia allowed his second goal through his five-hole.
Bakersfield Condors Goal: 3-2 Condors
Xavier Bourgault from Justin Bailey

The goalie guild won’t be happy with that one!
After outshooting the Condors eight to one over the first ten minutes, the Canucks’ conceded seven to zero over the final ten.

The good thing about Abbotsford taking their foot off the gas in the back half of the second period was that it allowed them to reset ahead of the third.
For the second straight period, the Farm crushed Bakersfield with sustained offensive zone pressure, popping off with five shots on Rodrigue through the period’s opening minute!
Typically, a third-period penalty kill in a one-goal game is bad! However, for John Stevens, a penalty kill is a time to thrive! After leading Abbotsford with five shorthanded goals last season, Stevens continued his PK production with his fifth goal.
Abbotsford Canucks Goal: 3-3 Tie
John Stevens from Jett Woo

Things we like to see in this sequence: Jett Woo picking up his second point of the night with the board-and-out play and Stevens outracing Greg McKegg to go forehand-backhand on Rodrigue.
The Canucks successfully killed Pederson’s penalty, conceding zero shots over two minutes.
After a mid-period lull, the Arseneau/Karlsson/Regush line continued to build their chemistry, setting up the hometown kid, Regush, for his first goal at home.
Abbotsford Canucks Goal: 4-3 Canucks
Michael Regush from Vincent Arseneau and Christian Wolanin

Things we really love to see in this sequence: Linus Karlsson protecting the puck along the boards to fish the puck over to Arseneau. Followed by Arseneau picking up a primary assist with a quick cross-ice pass to Regush from the half-wall. And, of course, how can you not like the top-corner snipe from Regush in front of friends and family?
The Condors generated a second power play opportunity late in the period, but the Canucks penalty killers again held them to minimal offence. The Condors recorded two shots on goal through two power plays while conceding one shorthanded goal.
Vasily Podkolzin had a very quiet night for Abbotsford. Though the team finished with 37 shots on goal, Podkolzin was only responsible for two of them.

Context is important as Podkolzin played his first back-to-back after missing close to two weeks as a healthy scratch in Vancouver. It was a perfectly fine performance. With Podkolzin on the ice, the Canucks rarely spent any time in the defensive zone. However, the time spent in the offensive zone did not yield many dangerous sequences that stood out.
The Condors nearly made it a four-all game in the final thirty seconds when a point shot from Mike Kesselring clipped Delia’s right post.

Fortunately, the Canucks secured the victory, outshooting the Condors 16 to three over the final twenty minutes, 37 to 18 overall.
It was the weirdest “not close, close game” of AHL hockey I’ve seen.
Scoresheet
Abbotsford Canucks defeat the Bakersfield Condors 4-3

Honourable Mention: Chris Faber’s Hyundai for getting him to the game from downtown Vancouver.

The Farm takes a two-day break before returning against the Laval Rocket for a Saturday/Sunday doubleheader.
Editorials
Recent articles from Cody Severtson