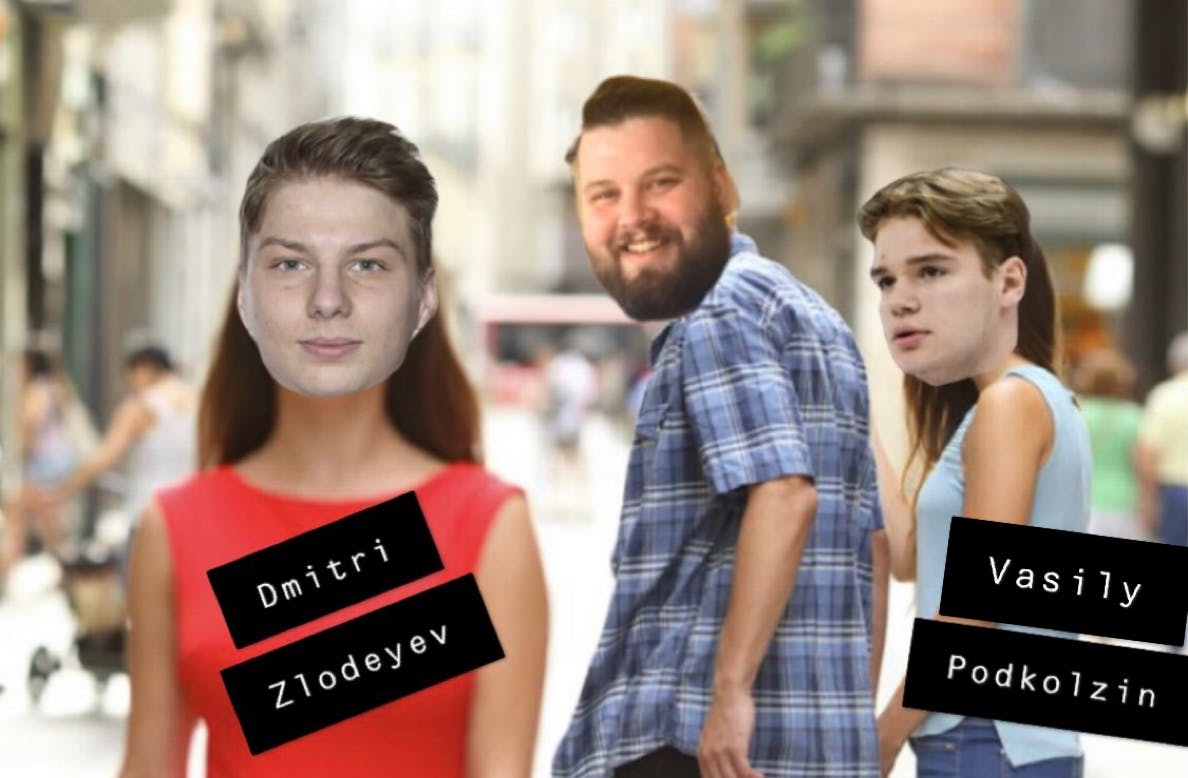 By Faber
1 year ago
Coming in at #8 on my top-10 Vancouver Canucks prospects list is Russian centre Dmitri Zlodeyev.
After he was selected in the sixth round of the 2020 NHL Entry Draft, I knew that it was time to dive in on the Zlodeyev tape. My initial viewings brought immediate positive feedback.
Zlodeyev is a centre through and through. There won’t be any time on the wing for him and a big reason for that is his high-end faceoff ability. He gets extremely low in the dot and wins a lot more faceoffs than he loses. It’s a skill that he has clearly practiced his whole life and snaps the puck back like a veteran. His faceoff ability is a big reason why he is trusted to take the first faceoff on a penalty kill or on the power play.
Over the past two seasons, a majority of his time has been spent with Dynamo in the MHL. To oversimplify, the MHL is basically Russia’s version of the CHL. The best U18 players will play in the MHL while the league allows players up to 20-years-old to compete, the better 18, 19 and 20-year-olds will be playing in the VHL or KHL if they are good enough. (See Vasily Podkolzin)
This past year, Zlodeyev split time between the MHL and VHL.
In the MHL, he is the assistant captain on a team that just advanced to the MHL finals on Wednesday. He plays alongside his childhood pal and Washington Capitals draft pick Bogdan Trineyev. I spoke with an NHL scout who said that many talent evaluators were very high on Trineyev while the smaller Zlodeyev didn’t draw the same attention. The Canucks took a late-round swing on Zlodeyev and the early returns appear promising.
Trineyev used his size to his advantage against the U20 competition in the MHL and produced points at a higher rate than Zlodeyev but both players played in the VHL this season and Zlodeyev was much more effective than the higher drafted Trineyev. 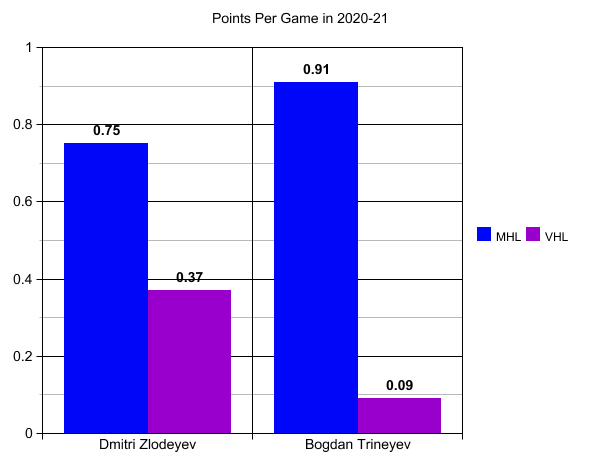 Once again, to oversimplify, the VHL would be the Russian equivalent of the AHL. The young stars playing in the VHL are typically a short step of development away from making the jump to the KHL and Zlodeyev finds himself in that exact situation. I spoke with Zlodeyev earlier this season and he said that he was supposed to make his KHL debut this season but suffered an unfortunate injury just days before his debut in Russia’s top league.
Injuries have been a problem for Zlodeyev this season but they have been a couple that he couldn’t do much about. He hurt his shoulder just before Russia’s World Junior team camp and therefore did not end up making the team as an 18-year-old. Zlodeyev was one of the youngest players on the Karjala Cup-winning Russian U20 team and should be a lock to make this year’s World Junior team. Zlodeyev was very sick to begin 2021 and was not allowed to be around the team for a few weeks as he recovered. One game after returning to action from the sickness, he took a puck to the face and was once again away from the team for weeks.
This upcoming year is a massive one for the development of Zlodeyev. After scoring seven goals in 19 VHL games, he should get a chance to play for the KHL team in 2021-22 and that would be a huge jump in competition that will challenge Zlodeyev to be better in all ends of the ice. The jump to the KHL and a World Juniors appearance will surely boost his value as a Canucks top prospect.
There’s a lot to like about Zlodeyev’s compete level, which is probably the second biggest thing that pops off the screen aside from his faceoff stance. He is ultra-competitive and committed to being an impact player at both ends of the ice. Here he is rushing back on a penalty kill to break up a two-on-one chance.
The thing that excites me about Zlodeyev’s potential isn’t the scoring ability or offensive creativity that he shows but it’s more about how he could fit a fourth-line centre role with the Canucks in the future.
If he continues to develop and makes his way over to North America, Zlodeyev feels like a new-age fourth-line centre that we are just beginning to see around the NHL.
A player who has a strong commitment to the defensive side of the ice while also being able to score goals when scoring chances present themselves. Zlodeyev possesses good hands and can make moves in a phone booth with his quick stickhandling.
There is some room to grow on his shot. A lot of his goals are from in tight or from rebounds after he is screening the goalie. He shows a strong effort level to be around the crease and create havoc for defending teams. He is incredibly quick at jumping on loose pucks and sees the ice well as a playmaker.
For these reasons, I believe that if Zlodeyev continues to develop, he can be a fourth-line centre for a competitive Canucks team in the future. He works his ass off and is a slave to the game of hockey off the ice.
Back in November, Zlodeyev came in at #11 on our CanucksArmy prospect rankings list. I was pushing for him to be higher because he already looks like a very polished centre and will have a massive test coming up in the 2021-22 season with the WJCs and his likely jump to the KHL.
Zlodeyev doesn’t need to be a top scorer when he arrives in the KHL, he just needs to look like he belongs as a teenager. He will play fourth-line minutes in the KHL and will have the chance to move up the lineup if he finds success. His KHL situation will be very different than Vasily Podkolzin’s has been. Even with Podkolzin being one of the top young players in Russia, he did not get time on a strict SKA team that doesn’t enjoy playing their young players if they aren’t going to be staying in the KHL. Zlodeyev will play for Dynamo in the KHL and the good thing about their organization is that if you are the best player for the job, you will play.
He is still at least a couple of years away from coming over to North America but will have a friendly face on the Canucks’ roster if he ever makes it to Vancouver. He enjoyed his time on the Russian U20 team with Podkolzin as his captain. Podkolzin’s leadership impressed Zlodeyev when they played together and they have built an off-ice relationship now as two Canucks draft picks.
This year is the time for him to make a real push up the Canucks’ prospects rankings.
The two big things to watch in 2021-22 will be his showcase with Russia at the World Junior Championships and his time spent with Dynamo in the KHL. If he is able to show well in both of those situations, he will rise up in the rankings. It’s always a good thing to have the middle of the ice covered in the prospect pool and Zlodeyev shows serious potential at the centre position.
Uncategorized
Recent articles from Faber